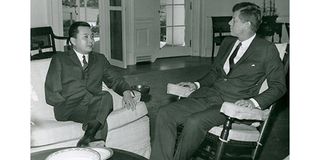 WASHINGTON – It was during yet another debate on the Senate floor about criminalizing the burning of the American flag. One after another junior senator took to the podium and fulminated with all due indignity about flag-burning despite there being no specific incidents recently. They delivered true, made-for-TV maledictions with just the right amount of flying spittle, the kind of delirious bloviating that leads reasonable folks to write all of Congress off as a herd of used car salesmen. (With apologies here to used car salesmen….)

Finally, the floor was yielded to a small, soft-spoken man who looked out as his colleagues and quietly said that he, too, hated the idea of flag burning. The chamber grew very quiet. Sen. Daniel Inouye had more reason than most to hate flag burning, since he gave his right arm defending it. But more than the flag itself, Sen. Inouye said, he fought to defend what it stood for. He fought for the principle of free speech, he said, and burning the flag—detestable as it was—represented for him a form of free speech.

Nothing spoke as loudly or as eloquently as his empty suit sleeve. Inouye, as is well known, lost his arm to a German hand-grenade in World War II, and then proceeded to rush a machine-gun nest with a few bullet holes in his body. Classified by his country as an “enemy alien” during the war because of his Japanese heritage, Inouye went on to serve it with uncommon grace, dignity and devotion for 50 years. Seeing Sen. Daniel Inouye speak in defense of the First Amendment was like witnessing a great spirit briefly reveal itself. When he left the podium, the debate was over.

Sen. Daniel Inouye was bigger, inside, than all those around him put together. That’s what I thought the day I saw his benediction for free speech. His kind are rare and too few and far between. Whatever balance of mettle, discipline, intelligence and humility he had, most of us do not. And so my heart grieves for what we have lost. He was indeed, in every sense of the word, a great man.

Thank you, Sen. Inouye, for showing us what that means.