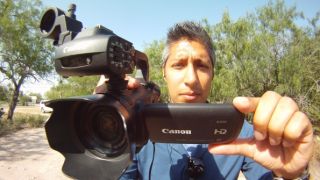 How does a station capture news footage in the pitch-black and turn it into a regional Emmy-winning special news report?

For KRGV TV-5, in Weslaco, TX, the answer is the compact Canon XA10 professional HD camcorders. Equipped with infrared features for shooting in total darkness, the station’s handheld Canon XA10 HD camcorders were instrumental in producing “The Battle in Brooks County,” a special report on the plight of illegal immigrants that won a 2011 Lone Star Emmy Award.

Reporter Jordan Williams and photographer Mike Ortiz accompanied sheriff’s deputies on night patrols of vast ranchlands and used the XA10 HD camcorders to document the perils of illegal immigrants abandoned by human traffickers in the deserts of southern Texas.

“During the past decade, our area has seen hundreds of illegal immigrants cross the border, get lost in the brush and die,” Williams explained. “We were out on patrol one day and found two men who were dehydrated and in very bad health. Mike had his shoulder-mounted ENG camera and I had the Canon XA10, and we did an instant two-camera shoot right there on the side of the road. The men told us their story and were suffering so badly they had to be taken to the hospital. It’s a sequence that will always stick in my mind.”

“We captured memorable footage at night as well, including interviews with volunteers who patrol the ranchlands in the dark looking for lost illegal immigrants,” Ortiz added.

Capable of shooting in conditions with little to no ambient light, the Canon XA10 professional HD camcorder features infrared video capture and an infrared emitter with a diffuser, as well as a green or white color option to shoot HD infrared imagery even in complete darkness.

“As the station’s former chief photographer I know cameras,” said KRGV operations manager Israel Alfaro. “I do the budget for the news department, and look for equipment that can help the news team. The Canon XA10 caught my attention because of its infrared features.”