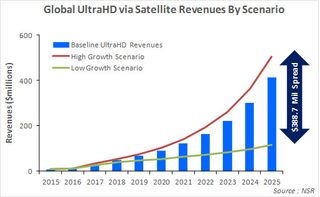 Ultra HD, the “next big thing” being pushed by television set manufacturers at the CES show in Las Vegas earlier this month, will be a “small niche” opportunity for satellite broadcasters, said Northern Sky Research (NSR), the international research and consulting firm based in Cambridge, MA.

A new NSR Report entitled “UltraHD via Satellite” finds that the nascent market for Ultra HD is expected to start at a modest level in 2015 with just 15 channels being demanded by the global cable TV, IPTV and DTH industries combined. The global satellite Ultra HD market is expected to reach $412 million in 2025 from an $8.2 million revenue base in 2015.

With ROI metrics being volatile in the early part of the market cycle, NRS said the expectedly small niche that Ultra HD is likely to serve would be due to the pay TV industry’s slow adoption of this new video format.

TV manufacturers such as Sony, LG and Samsung have already announced Ultra HD sets, and cameras to shoot Ultra HD are already on the market. “However, real risk-taking has to come from TV content owners and service providers who will be delivering Ultra HD to households. At this stage of the market cycle, there does not seem to be enough impetus towards substantial investments,” said Jose Del Rosario, the study’s author and a senior analyst for NSR.

The percentage of Ultra HD channels compared to SD and HD channels is expected to continue to be a very small share, NSR said. “It is NSR’s view that Ultra HD will be a small niche with minimal impact in revenues and channel carriage over the long term, relative to SD and HD growth,” said Del Rosario.

The report provides a complete and comprehensive analysis of addressable markets and demand trends covering 10 regions and three distinct vertical markets, including CATV, IPTV and DTH.