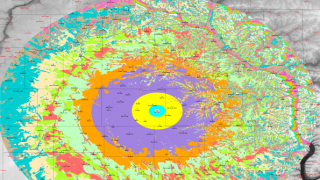 The FCC’s Office of Engineering and Technology (OET) has released new software it will use to repack television station coverage areas after the incentive auctions are held.

The OET wants comments on “any errors, unexpected behaviors or anomalous results produced in running the software.” It also asked for comments on additional capabilities that might be added, including methods for identifying populations subject to interference.

Called TVStudy, the software uses an updated version of the Longley-Rice model to calculate TV station coverage areas and potential interference. Longley-Rice is a radio propagation model for predicting the attenuation of signals in the frequency range of 20MHz to 20GHz.

Longley-Rice is an irregular terrain model (ITM) that was created for the needs of frequency planning in television broadcasting in the United States in the 1960s. It was extensively used for preparing the tables of channel allocations for VHF/UHF broadcasting.

The TVStudy, developed on a Macintosh computer, uses a Java-based graphical user interference that draws on data from the applicable databases. It also has an analysis engine that does the coverage and interference calculations.

“The Commission developed the software that is currently used to implement OET-69 to support the DTV transition, and we have subsequently used it to analyze applications to modify the DTV Table of Channel Allotments,” the OET said of the release. “As such, the software programs developed by the FCC for those purposes are based fundamentally on source code and data from the 1990s and earlier. Since that time, some of the underlying datasets have evolved or have been replaced. In addition, parties have gained sufficient experience to have offered FCC staff informal feedback on the existing programs’ relative strengths and weaknesses.”

Broadcasters say they want to see how the FCC will repack stations before deciding whether or not to participate in the auctions.

The NAB was hesitant about the release of the software.

“This proposal introduces a new level of legal uncertainty as well as confusion about coverage areas and populations served by local television stations,” said Dennis Wharton, the NAB spokesman. “We’ll be engaged with the commission, Congress and other stakeholders to ensure that this proposal doesn’t distract or unnecessarily delay the task at hand.”

Comments on the new software will be accepted until March 21. Reply comments are due April 5.