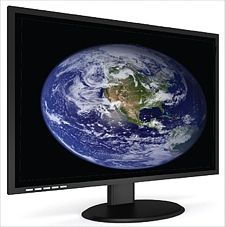 Among the defining traits of engineers and technicians is an idealistic belief in "the right way of doing things"… an objective notion which appeals to intellect and logic, and abides no compromise. No wonder we're so seldom happy.

And among the burrs under our collective saddles these days, few issues rank higher than the wanton mismatch in aspect ratios we confront on a daily basis. Side flags, letterboxes, anamorphic squish or oblong stretch—to a perfectionist, it's wrong, wrong, wrong. We worked long and hard to shepherd a pristine picture through the production gauntlet, and for what? So we can see it annihilated upon transmission?

True, these are transitional times, waiting for an aging generation of CRTs to meet their demise. But even Apple's Final Cut Pro tucks away its aspect-changing controls under the heading "distort"—and if Steve Jobs says it, it must be true.

For those of us who grew up before the advent of the flatscreen, there was no innate concept of "television aspect ratio;" TV was that rectangle on the tube face—end of discussion. In the days before pixel counts like 640x480 and 720x486 were calculated—in fact, in the days before pixels—4:3 was the doublet to know, even though you didn't really have to use that knowledge in practice. The camera or VTR made the image, and the dimensions were fixed, plus or minus a sync pulse or two. Engineers may have confronted the concept downstairs in the telecine room, cropping out-of-aspect 16mm and even 35mm films for on-air play; but elsewhere, the orthodoxy of the NTSC standard meant that the only shape anyone would ever see was that 4:3 rectangle.

Ahh, for the good old days.

On the books, television today supports only two aspect ratios—and about a thousand methods to achieve them.

The amount of content that gets stretched in the conversion process is truly discouraging. Credit: iStockphoto/Alex Slobodkin For example, a high-definition picture can be derived these days by at least a dozen different raster sizes, with 16:9 equivalent numbers ranging from 960 to 1440 to 1920. Add in the square versus rectangular pixel factor, cinematic aspects like 1.85:1 and the wacky European notion of a 14:9 "bridge" ratio and it's a wonder that our televisions don't have triangular screens.

When you step into the gray area where TV meets computers, the adventure really begins. One of our more oddball assignments recently was to "televise" live medical lectures from within a trade show booth, for presentation on a set of 42-inch widescreen displays around the booth's exterior. Easy, no?

The small-format, HDV-capable camera switched into 16:9 SD without a hitch; the portable switcher merely required a change in the setup menu; and we pre-built anamorphic lower thirds to match the wide aspect. As usual, though, the devil's in the details: there's no built-in 16:9 preset for Microsoft PowerPoint, so you've really got to work hard at sizing the presenters' slides to match the video. Never mind the software, though—finding a garden-variety rental computer capable of outputting widescreen graphics ("WXGA") is a catch-as-catch-can proposition, and we failed to make the catch. A Folsom scan converter bridged the raster gap for us.

And herein lies the engineers' frustration: This isn't something new. It isn't some oddball scheme cooked up in someone's basement; off-the-shelf, broadcast-quality technology should do the trick. Navigating the aspect ratio issue should be no problem. It's either one proportion or the other.

At home, though, well, that's another story.

At our house, the kids seem to want the picture to touch all four corners of the 16:9 screen at all times, regardless of whether the content's formatted that way or not. And it makes me crazy. Circles become ovals, noses spread across faces, and sedans turn into limousines. Engineers can't understand why you'd shoot at 24 fps when higher rates like 30 or even 60 fps are possible; that same ethic makes watching wide, squishy pictures a high crime.

And to add to the confusion, we have the antics of the broadcasters themselves. Presumably, it's more expensive to prepare separate HD and SD versions of things like bumpers, promos and commercials for routing to a cable outlet's respective streams, but the amount of content that gets stretched or "double-letterboxed" in the process is truly discouraging.

Apparently, misaligned aspects cause passions to run high. That may explain why the Turner Network's ingenious solution to mixed aspects seems to raise the hackles of some widescreen purists. Turner worked with Teranex, arguably the best-known name in format conversion algorithms, to create a nonlinear stretch, one which maintained correct aspect for the central 50 percent of the 4:3 original, then stretched the remaining 25 percent side panels to fill the balance of the 16:9 screen area. It looks a little funky during pans and horizontal movement… almost a fisheye lens effect; but because the center of the image retains its proportions, the immediate effect is a natural look, certainly less jarring than side flags or a brute force resizing.

But "the Teranex stretch" so bitterly bemoaned by the videophile set, while clever, is still a distortion—less than perfection. It will simply require patience, waiting for both the display side and the content generation side to finally get on board.

And there you have it—the crux of the conflict. Engineers, "less than perfection," and "patience" all lumped together… a sure recipe for disaster.