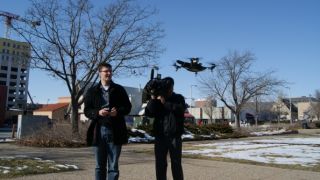 Broadcast engineers share some interesting common traits. Most are driven by natural curiosity and a love of new gadgets. The best are as reliable as the National Bureau of Standards, know that the show must go on, and instinctively place the safety of the station and people first. They also have the uncanny the ability to temporarily overcome many Murphy’s Law gaffes with gaffer tape.

Part of the fun of being a broadcast engineer is that there is always a new technology to learn and new gadgets to master and fix when they break. Some are purely electronic like Apple’s iPad. Others are more an electromechanical mix, such as studio camera automation systems. Then, there’s the drone.

Look! Up in the sky!

An amazing new gadget is on the newsroom’s horizon, and it’s a drone, also known as a UAV (Unmanned Aerial Vehicle). By any name, it is the latest high-tech electro-mechanical device coming to news gatherers and who-knows-what-else near you. Drones are rapidly becoming the latest rage, except for one thing: It is against the law to operate a drone in the United States for commercial purposes. Similar to amateur radio regulations, commercial use is flatly forbidden. However, that limitation is scheduled to change.

A recent story on CBS DC championed Schiebel Corporation’s Camcopter S-100 as an example of the potential of a UAV in ENG. The Schiebel S-100 with the accessory packages that would make it useful for ENG weighs nearly 300lb and costs north of $300,000.

I saw the Schiebel S-100 at NAB2012. There was a curious crowd in the booth, but to me it looked more cinema than television. A demo reel at Brain Farm tells that story in a strikingly visual way, and is definitely worth taking a moment to watch.

The S-100 struck me as expensive at the time, but compared to operating a real helicopter, the capital purchase and operating costs were fractional. The upfront cost is similar to a fully outfitted SNG van, but the Schiebel S-100 is, some might say, the CL-Class Mercedes of drones. It’s big, heavy and reliable, and it dominates its airspace. There are also a variety of Miata-class and go-cart class drones available from a variety of sources, most sporting 640 x 480 analog systems. Some come as a kit. Is it “broadcast-quality?” Absolutely, if it’s the right story. It’s also illegal as heck in the USA at any resolution if used commercially.

While searching for more drone ENG information, one person’s name began to routinely appear. That person is Journalism Professor Matthew Waite at University of Nebraska - Lincoln. More research indicated he is a drone journalism go-to guy. I sent him an e-mail, and the next morning we were chatting on the phone.

Turns out Professor Waite is thinking in terms larger than TV ENG. The former newspaper reporter spent much of his journalism career at the Tampa Bay Times reporting on natural disasters such as hurricanes, tornadoes and floods. He began to recognize the need for aerial video as he learned how difficult it was to know where and how far damage extends. Few news operations have a manned aircraft available for every story where one would be helpful. An aerial platform could provide great leads for scoops. He wondered if there was an affordable solution.

Fast forward to a Digital Mapping Conference that Professor Waite attended just over a year ago. There, he was introduced to the Gatewing X100 Ariel Mapping Platform, which you can see here. It has the ability for the pilot to pre-program the flight path with GPS waypoints on a laptop, and the drone will automatically and autonomously carry out the mission upon demand. Its cost is about $65,000 and is illegal for use in the USA. However, that’s when the concept of drone journalism struck the professor.

Waite thought about how helpful it would be if a reporter could pull a 4ft x 3ft Gatewing X100 or similar drone from the trunk of a news vehicle and launch it at the scene of a news event for a live aerial view. After more serious thought, the Professor approached the school’s Dean with a brand new idea. That’s when the UNL School of Journalism’s Drone Journalism Lab was born.

Professor Waite says there is something of a land rush among universities toward drones, each in a quest to become “Drone U.” At this time, university research is about the only entity that can receive FAA permission to test fly drones in potentially commercial applications.

The mission of UNL’s Drone Journalism Lab is to deal with philosophical, regulatory, safety and liability issues resulting from the journalistic use for what Professor Waite referred to as basically a “flying lawnmower,” with all the risks implied. A rogue drone, or one whose batteries simply ran out, could instantly become a bigger news story in a very unbecoming way.

Regardless of what name you choose to call it or whether you think it’s a good idea or not, commercial UAV drones are coming to the USA. The FAA has been in the process of reviewing with the intention of loosening UAV regulations for several years. It recently received a direct mandate from Congress under the FAA Modernization and Reform Act of 2012, demanding the skies to be open to commercial drones by 2015. Guess what the theme of NAB2015 is likely to be?

While broadcast TV news applications are obvious to us insiders, there are many other industries and professions anxious to embrace the benefits UAV technology offers. Among them are power transmission and pipe line inspections, crop field monitoring, paparazzi, realtors, sports and, of course, law enforcement. Pent-up demand is tremendous and growing. According to information I could find, DHS is interested, but isn’t necessarily trying to build a fleet of new drones. DHS has been quietly deploying decommissioned Predator drones for border patrol and other tasks for a several years. However, the commercialization of drones looms as large in the future for DHS drones as it is for anyone else relying on autonomous airborne hardware in crowded domestic airspace.

Soon, only not yet

Last year, one news outlet, whose name is irrelevant, released drone-generated video of tornado damage in Tuscaloosa, AL, and Joplin, MO. The FAA stepped in and insisted they cease and desist airing the footage and gathering news with a drone, which they did. This happened because, as Professor Waite suggests, one earth-shaking video or photo from a drone could open the flood gates and overwhelm federal regulators. The FAA wants to avoid that scenario.

If the federal government thinks we have RF spectrum problems, wait until drone airspace becomes a problem. It is unlikely that a local altitude coordinator will operate like a local SBE frequency coordinator. Rather, the FAA wants to pre-approve commercial drone flight patterns before launch. How will this affect journalistic activity if an event occurs that someone in authority doesn’t want broadcast? How quickly can they respond? Could pre-approval amount to censorship?

The FAA is in a most precarious position. The technology and hunger for what drones offer has surpassed the agency’s ability to effect regulatory changes. Problems are huge, ranging from privacy and liability to safety. Privacy and liability issues are interesting and will certainly have an ultimate effect, but as this is a Broadcast Engineering tutorial, we’ll leave such heady legal debate to the experts and the water cooler.

Speaking of legal issues, what’s the safest prediction about commercial drones? It would be that another lucrative new industry will be born simultaneously — Drone Law. What happens when an errant drone takes down a manned aircraft or airliner? I don’t think any of us want to know, but the experienced broadcast engineer knows better than to completely rule out anything. In addition to Murphy’s Law, add gravity to your list of things to consider.

Next to gravity, the next biggest problem with drones is their autonomy. They have no sense-and-avoid technology. They do as they are told, completely ignorant of their surroundings. This technology must be mature before drones are deployed around people. Most drones already have some fail-safe technology. They shut down and auto rotate to the ground with loss of signal or propulsion. Auto-rotate works better with more rotors. It won’t slow the descent of a dead four-rotor platform as it would an 8-rotor platform.

Another item worth consideration is hacking and viruses. PBS recently reported a story about key-logging viruses in a government drone network. You can find the story here. If it can happen in the military, should your station be concerned?

Another concern is GPS spoofing. GPS signals, as you may know, are not secure. Recently, a University of Texas professor and his students built a device to spoof GPS altitude data and used it to reduce the altitude of a GPS-controlled drone until manual override was required to keep it from crashing into the ground. The device cost less than $1000 to build.

Commercial use of drones is presently banned in the USA, but experimental drones can be flown within regulations. Experimental drones are allowed to fly at altitudes up to 400ft, within eyesight at all times, and cannot be flown over populated areas. They cannot be used for commercial purposes. By 2015, new regulations to open those restrictions are expected to be in place or at least on the way. For right now, these are the rules.

Knowing the present restrictions, if you’re interested in radio-controlled (R/C) drone video, experimentation within the bounds of the law might be an excellent career move. Be aware however, that drones crash. Often. If you want to get some R/C flying experience, start with something cheap, practice in the middle of nowhere, and get permission from the land owner first.

How did your corporate VP of IT get such a strong grip on the brass ring? He was probably the first guy or gal on the block to buy and master a telephone modem. A similar career opportunity scenario could be unfolding with drones, ENG or otherwise.

Do not let anyone trick you into airing your hobby video or using your amateur drone gear in any way at work. Federal regulations always trump raging newsroom hormones. That’s why nearly everyone wants the FAA to start making some binding commercial drone decisions.

One of the FAA decisions in play is who can and can’t fly a commercial drone platform in domestic airspace. In most military scenarios, a two-person crew flies the drone — a pilot and a sensor operator. Many in authority want domestic drone pilots to hold at least a FAA commercial pilot’s license with an instrument rating, and have a third class or better FAA medical certificate. The sensor operator does not necessarily need to be a licensed pilot, but it would be a huge resume plus. Air traffic controllers want formal ground training and special licensing of drone pilots.

It should be noted that Australia introduced the world’s first national commercial drone legislation in 2002. Today, 14 commercial licenses have been issued, most for larger fixed wing commercial drones. Interestingly, the latest list doesn’t include any broadcasters, although Australia’s ABC News is reportedly testing drones.

The author wishes to thank Journalism Professor Matthew Waite at the University of Nebraska-Lincoln for his help and valuable insight in preparing this tutorial. He can be contacted at matt.waite@unl.edu. His drone journalism website is at http://www.dronejournalismlab.org/.