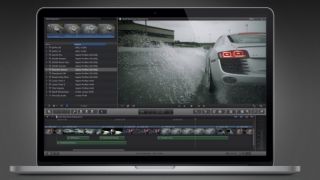 Apple’s Final Cut Pro X editing software just got a major free upgrade this week, as did Apple’s lightest laptop, which now includes a Retina display. Editors once disappointed with recent X versions should be pleasantly surprised that many of their stated needs have finally been met.

The upgrade expands multichannel audio files directly in the timeline for precise editing of individual audio channels. It includes a new unified import window, which allows users to transfer media from both file-based cameras and folders of files. A redesigned “Share” interface was added, offering users the ability to export projects and range selections to one or more destinations.

Flexible Clip Connections allow one to keep Connected Clips in place when slipping, sliding or moving clips in the Primary Storyline. A freeze frame can be added to timelines with a single keystroke. Drop shadow effect with intuitive onscreen controls adjust position, edge falloff and angle.

There are new controls for combining audio from multiple angles within a Multicam Clip.

Compound Clip creation in the timeline now saves the clip in the Event Browser for re-use in other projects. XML 1.2 features metadata import and export for richer integration with third-party apps.

Ideally suited for ENG-style functionality, such as fast video editing and photography work, the new portable is now available through the Apple Online Store and Apple Retail Stores starting at $1699.