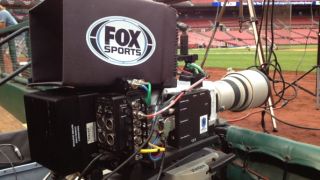 As part of its live HD coverage of the 2012 Major League Baseball World Series, Fox Sports is using a special high-frame rate SloMo camera rig put together by a specialty production company in Jacksonville, VT, called Inertia Unlimited. The rig, called the “X-Mo” ultra slow-motion Phantom camera system, consists of a Vision Research v642 high-speed camera, Canon HD lens and a Telecast 3400 fiber transceiver to bring all comms and some control data back to the production truck on-site.

A total of five X-Mo systems will be present in both the San Francisco Giants and Detroit Tigers home ball parks. Three systems will be used at “normal” 3X slow-mo speed of around 300fps to 420fps, with signals transferred via the CopperHead 3400, and two higher speed cameras (maybe 3000fps to 5000fps), also with our technology on the back of the camera. The latter Vision Research cameras, originally developed for critical analysis of manufacturing processes, can shoot at up 20,000fps with a 500mm lens.

The cameras will be located at mid first base, mid third, centerfield, low first base and low third. The Copperhead 3400 converts the baseband signals coming from the Vision Research camera to optical so that it can be transferred over tactical fiber and inserted into the live production.

Jeff Silverman, president and owner of Inertia Unlimited, said the X-Mo cameras and Telecast CopperHeads are not only being used for slow-motion work, but they are also being employed at lower frame rates (60fps) and used as “normal” (720p) HD cameras. Fox sports uses the unique camera system this way for its Sunday NFL football telecasts, making the most of a single camera position.

The X-MO system will provide the most compelling slow motion ever seen. In fact, one of the systems was tested during the National League Championship Series game in San Francisco this week, and on television you could see the bat wobble as it stuck a baseball and clearly make out the veins in the pitcher’s neck during a particular pitch. At some points during the live broadcast, the camera was capturing images at 12,000fps. For the World Series, that frame rate is being reduced to conserve bandwidth and on-board storage.

Aside from the Ultra Slow-motion, both Game Creek (in Detroit) and NEP Supershooters (in S.F.) will handle the production in the respective ballparks, complete with Sony HDC2400 and Grass Valley LDK 8000 Elite HD cameras and Grass Valley Kayenne and Kalypso HD switchers. For the X-MO systems, a traditional Sony RCP and video controller is dedicated for each replay operator along with a camera CCU base station that includes the 3400 and a few other items. All signals are being sent over SMPTE hybrid cable or tactical fiber. Some of the time, the X-Mo camera will be used at 60fps to produce a standard 1080p HD image.

Silverman said the Telecast Fiber Systems Copperhead is ideal for this type of camera set-up because it reduces the amount of cabling required while providing the extra bandwidth needed to transmit the data-intensive streams directly out of the extremely high-speed camera. This massive amount of data is stored in solid-state memory inside the camera and then sent back to the truck for playback via Ethernet connectivity. Providing the slow-motion feed and a regular (60fps) HD feed back to the production trucks (where it will be remotely controlled along with approximately 30 other HD cameras) is critical to the live coverage and serves as a great addition to the live HD broadcast for viewers.

So far the response from Fox Sports “has exceeded the wildest expectations of everyone involved with the production,” Silverman said.