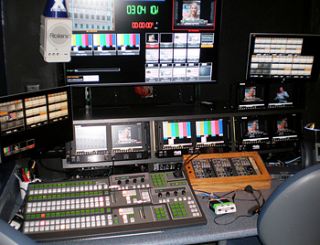 Xavier University’s Cintas Center in Cincinnati has received a video system makeover that includes a new LED video display driven by a new Broadcast Pix Slate 5000 video production system. The new system replaces an analog switcher that was installed when the 10,250 seat sports center opened in 2000 and was part of the upgrade to digital operations.

“It just made sense,” said Chris Schaaf, senior assistant technical director for video production at Cintas Center. “As we demoed the Broadcast Pix, we were switching and building DVE boxes within 10 minutes. That’s important because students run all of our events. It’s simple enough so students can come in and, after a little instruction, be on their way to switching a show.”

Schaaf noted that the new Slate system has simplified game day workflow and its multiple functionality has also freed up space within the operation’s control room.