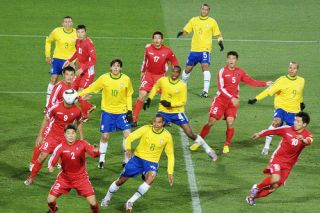 NEW YORK: More than one-third of U.S. TV viewers have tuned into World Cup games across English- and Spanish-language networks, Nielsen said today. The matches have reached an estimated 99.2 million U.S. viewers, or 34 percent of the nation’s total audience.

“The audience reach measurement is a good indicator of how many viewers are at least curious enough to see what all the buzz is about,” said Stephen Master, vice president of sports at Nielsen. “Even with the World Cup’s most crucial games still to come, a reach of 99.2 million viewers suggests that there’s a big American appetite for world-class soccer.”

New York City was second for English-language telecasts with a 3.3 rating, followed by Washington D.C. with a 3.2. San Diego, Calif., the top market for the 2006 World Cup, so far ranks fourth among markets with a 3.1 rating.

Among other viewing records for this year’s World Cup soccer tournament, the July 18 match between Team USA and Slovenia drew ESPN’s biggest household number for a soccer game. A total of 5.2 million people in 3.9 million homes tuned in. The June 12 draw between the United States and England pulled in 14.5 million viewers on ABC and Univision, making it the most-watched 2010 World Cup telecast in the U.S. up to that point. Then 19.4 million people tuned in on June 26 when Team USA struggled valiantly before giving it up to Ghana, breaking even the previous high of 18.1 million viewers for the 1994 game between Brazil and Italy.
-- Deborah D. McAdams
(Image by Rekhviashvili)

See...
June 28, 2010: “USA-Ghana Marks Most-Watched Match Ever for U.S. Soccer”
An estimated 19.4 million U.S. viewers watched USA’s loss to Ghana on Saturday, making it the most watched soccer game ever in the United States, according to Nielsen data.