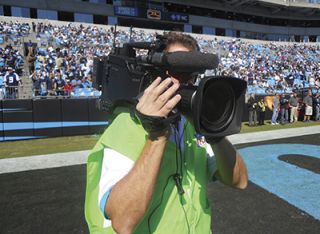 BUFFALO, N.Y.—Wireless microphone advocates are banding together to push for protections in next year’s broadcast spectrum incentive auctions.

Late last month, Louis Libin, CEO of Broad Comm Inc., an Oakland Park, Fla.-based telecom consultancy, warned a Capitol Hill audience of congressional staffers about a possible serious threat to broadcasters, production companies, theaters, churches and other major users of wireless microphones posed by the FCC’s 2014 incentive auction of 600 MHz broadcast spectrum. What they fear is the loss of white space spectrum—unoccupied TV channels— used by wireless mics, along with the 12 MHz of bandwidth now reserved for wireless mics in each media market in the United States.

“No one knows how we’ll cope if we lose our safe harbor channels,” Libin said. “We’re already scrambling for bandwidth during NFL games let alone the Super Bowl, where you need several hundred wireless channels. Depending on how the auction goes, we may simply not have enough prime bandwidth for all wireless mics at Super Bowls or US Opens. As global technology leaders, it could be a national embarrassment for the U.S.”

Louis Libin (L), president of Broad Comm Inc., spoke on Capitol Hill last month. The 2014 auction was triggered by the Middle Class Tax Relief and Job Creation Act of 2012. A portion of the bill contains the “Spectrum Act” which calls for an incentive auction of broadcast licenses in the 600 MHz band, in part, to underwrite a long-awaited public safety network to prevent the communications chaos of 9/11. The rest of the anticipated $20-plus billion would go toward relocating displace broadcasters and debt reduction.

According to Julius Knapp, head of the FCC’s Office of Engineering and Technology, who also spoke at the briefing, the commission won’t know in advance exactly how much bandwidth will be up for grabs in 2014, as each broadcaster must first voluntarily decide whether to sell their 6 MHz license in a “reverse auction” whereby bidders must first meet a reserve price set by each broadcaster.

This complicates the commission’s plan to repack the spectrum to maximize efficiency and minimize interference. “Since we won’t know in advance how much bandwidth we’ll have to offer, we’re developing several band plans that anticipate the most plausible outcomes,” Knapp said. There is also debate over how broad the buffer zones between broadcast channels and cell and data spectrum should be. Some of the new white spaces could be used by wireless mics and other devices too, Knapp added.

In the letter, co-signed by ABC, CBS, Fox TV Stations, Fox News, Univision, the NAB, and most major TV station groups, the broadcasters told Clyburn that “given that the band plan discussions do not appear to contemplate a future with clean spectrum for microphones, we fear that the commission inadvertently may be heading down a path that puts newsgathering at risk… We urge you to preserve the two channels set aside for wireless microphone use in each market.

“We may be using up to 2,500 channels of wireless mics simultaneously on Broadway on a busy night, and many theaters share walls,” said Tom Ferrugia, chief counsel for the Broadway League, a trade association for the New York theater industry. “Avoiding channel interference is a big challenge and will only get tougher after the 2014 auction.” He added that Broadway generates more than $12 billion worth of economic activity in New York annually.

If enacted, HR 2911 will enable wireless microphones to continue operating at fairly high densities comparable to current levels. But new technology will be key to accommodating the competing needs of wireless mic users and consumer demand for ever more bandwidth.

However, progressive audio companies aren’t waiting for the fallout from the incentive auction before responding to this challenge.

“Manufacturers are exploring all options to address reductions in available UHF spectrum, including new intercom products in the VHF band,” said Mark Brunner, senior director, Global Brand Management at Shure Inc. “At Shure, lower intensity music and presentation applications are being served by wireless microphones in the 900 MHz and 2.4 GHz bands. For high channel count productions, however, UHF is still the primary operating band, and we are working to improve spectral efficiency in both analog and digital designs, like Axient and ULX-D. However, digital wireless mics rely on known, clear spectrum, which is why the two reserved channels are so critical. Without them, the engineering challenges are much steeper.”