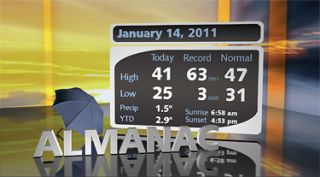 SAN FRANCISCO—The force driving today's consumer is one of connectivity, a trend that may be anchored with a TV but undoubtedly morphs to secondary distribution outlets like a smart phone and the iPad—often before the television set is even turned on.

And nowhere is that need to know as potent as it is in the world of local broadcast weather. Beastly hot or thunderous rain showers—consumers are in a constantly evolving state of searching. Today, however, that audience isn't always standing still.

As a result, today's weather graphics technologies have to be mobile, easy to use and compelling.

The Omni 3 weather platform from Baron Services provides high-definition 3D capability for every aspect of on-air weather presentation, including cityscapes, radar and weather data, graphics, and animated 3D models. "Broadcasters have recognized that you need to be where your viewers are," said Bill Boss, vice president for media product development for Weather Central. "If you can have [viewers] with an app that's your brand on their smartphone, when they do tune in, hopefully you'll get them to tune in to you."

It's ironic: In an era where traditional broadcast audiences continue to be fragmented and segmented, weather has kept its audience enthralled. As it has for more than 50 years, the weather segment on a local TV broadcast continues to be a station's number one viewer enticement.

In response, a growing number of weather graphics solutions are following cues to make graphics both compelling and interactive. Stations are tapping in to the mobile market and simultaneously publishing offerings to social media outlets while the broadcast is still in session. They're also gathering details from social media sites and literally talking to anchors between breaks, making sure "they're getting fed information on what's going on an individual story as the news comes in," said Ardell Hill, president of broadcast operations for Baron Services in Huntsville, Ala.

The trend has been taken up by stations such as WKRC in Cincinnati, whose mobile app offers radar, live video and planning forecasts; and KTRX in Houston, whose Live Mega Doppler 13 is for tablets and smart phones.

"Weathercasters have to produce across all the platforms, not just the big screen," said Bill Dow, vice president and general manager of the WSI Media Division in Andover, Mass. WSI is one of several firms who have taken this task to heart, producing a feature within its TruVu Max weather system that allows stations to produce a video that can be edited and then automatically posted to the Web site or reformatted for mobile devices. "Video is the most valuable component you can monetize since it shows off the station's most valuable asset, which is their talent," Dow said. "Extending a station's reach and presence in the market is key."

WSI TruVu Max Weather System It was feedback from local broadcast customers that led Baron Services to enhance the Omni 3 weather solution, which can be used to create mobile offerings like standalone weather and radar apps, or to send weather data to mobile devices directly from a station's existing news application. The result is personalized forecasting services, microcast analysis, standalone radar widgets or individualized hurricane trackers, according to Hill.

Options like SAF-T-Net send targeted information directly to a consumer on the street, telling him what's happening right where he's standing, as well as what's happening back at his home. "There are very specific products that we think are the kinds of things that can help stations differentiate what they [offer from their competitors]," Hill said.

Personalizing a weather solution has been a key consideration for Vizrt, whose Viz Weather module works to create real-time 3D weather graphics in combination with a multitouch screen, which allows broadcasters to handle interactive graphic requirements.

What's unique about the system is the integrated map service called Viz World server that's used to create maps, said David Jorba, senior vice president of Vizrt American operations. "The data is applied to the maps, no matter what zooming capabilities you need, and all of it is geo-referenced," he said. "Users can change graphics and maps easily, all while remaining integrated into the weather system."

Weather Central’s Weather 360 iPhone app uses the phone’s GPS to track how far away the rain is. The system is data service agnostic, so data can come from any provider, allowing stations to mix and match where weather data comes from, Jorba said. Vizrt counts the Weather Channel as one of its U.S. customers.

"We combined this tracking technology to create a visually amazing experience that would give meteorologists the keys to tell the best story," he said.

"Severe weather is the number one way that traditional broadcasting can grow in viewership," Boss said. One solution from Weather Central, the Weather 360 iPhone app, takes a different approach by using the GPS capabilities of the phone to let consumers point at the clouds above to track how far away the rain is.

"The key is having something the broadcaster can cross promote," he said. "The broadcast industry is starting to learn that to survive, they have to embrace change and that technology is moving very, very quickly."

Cost remains an important piece of a local news broadcast, and the weather team hasn't been exempt from that ongoing belt-tightening. Stations are looking for sets of user-centric solutions that make it easy to produce compelling weather segments without the need of a large staff, WSI's Dow said. "What's happened is that meterologists are being asked to do more and more: cut back on staff, do more on shows, provide content to as many outlets as possible," he said.

WSI technology allows for a high level of realism, he said, with photorealistic images of earth, realistic casting of shadows and the ability to realistically reflect sunlight off the water. The company's Skycast 4D technology takes a 3D model of a city and builds realistic weather around it, such as storm clouds and the crack of thunder. "It's all about bringing as much realism to the presentation as possible," he said.

"What we're trying to do is keep pushing the envelope on realism, Dow said. "The question is, how to engage your viewers more, bring in info seamlessly and turn it around quickly to get viewers engaged," he said.

In many ways, the traditional on-air broadcaster lost an opportunity with the Internet, Boss said. Broadcasters from both the local and network level failed to realize the opportunities available in the early days of the Web. "They're caching up; they don't want the same thing to happen with mobile."