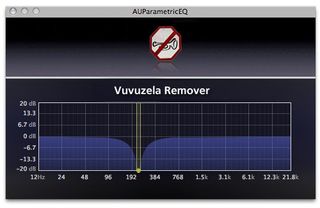 MULTIPLE CITIES: The term “vuvuzela” went from obscurity to ignominy in record time during the opening week of the World Cup. The single-note droning horns immediately became the defining sound of the internationally watched soccer tourney, to the expressed annoyance of viewers. The host broadcaster responded by slapping more filters on the audio.

Host Broadcast Services, the Paris-based company that manages FIFA World Cup coverage, said it doubled the number of audio filters it was using to reduce the vuvuzela noise.

“Despite HBS’ core philosophy, which is to provide ‘realistic’ host broadcast coverage reflecting the ambience in the stadiums, additional audio filtering has been implemented in order to reduce the drone of vuvuzelas,” HBS said in its daily newsletter to rightsholders. “The filtering has been doubled from -12dB to -24dB on both Dolby and TVIS, which will of course also affect other stadium sounds even though the level of the ball mics has been increased. MRL commentators are also encouraged to try out the HBS headsets, which provide better results than lip-mics.”

The vuvuzela has been a fixture of South African football since at least the 1990s, emitting a single, wobbling B♭ note that has energized some teams and driven others to distraction. The noise has lead to numerous Web-based campaigns

and several official complaints to FIFA calling for the instrument to be banned. The BBC received at least 545 complaints as of yesterday, according to the Toronto Sun, and took its own steps to minimize the noise.

FIFA chief Sepp Blatter declined to silence the horns on the tourney’s home turf, however.

“I don’t see banning the music traditions of fans in their own country,” he tweeted. “Would you want to see a ban on the fan traditions in your country?”

The popularity of the horn--or rather its sound--is growing worldwide as well. The vuvuzela iPhone app quickly generated more than 1 million downloads around the world, making it the No. 1 free app in Argentina, Turkey, France, Hungary, Japan, Korea, Mexico, Netherlands, Norway, Russia, Finland and a host of other nations.

An equal weight of technology is being applied to silence the vuvuzela. Waves, Digital signal processing company in Knoxville, Tenn., and Tel-Aviv, Israel, is offering a solution it claims “dramatically reduces the problematic sound of the omnipresent vuvuzela trumpet favored by South African soccer fans.”

Waves devised a real-time processing chain using two plug-ins--the WNS Waves Noise Suppressor and the Q10 paragraphic equalizer. The company says the combination of plug-ins both reduces vuvuzela noise and increases the intelligibility of play-by-play and color commentary. The processing chain for vuvuzela noise reduction is available as load-and-use sessions for Pro Tools, Waves MultiRack and Cubase at the Waves Web site.

A German audio engineer has come up with solution using an “inverse” sound wave track, according to news reports, though there some speculation about its effectiveness. Another report from Lifehacker.com says a hacker dubbed “Tube,” also from Germany, has come up with another way to kill the vuvuzela song.

“For the Vuvuzela-killer, we need only a high-slope band stop filter that takes out the corresponding frequencies,” says Lifehacker’s interpretation of the Tube. “For this, in principle, any modern computer that has a sound card with low latency and corresponding software should work. In our case, we used a Mac Mini and Logic Express 8. Actually, such a complex software such as Logic Express is not necessary. We use it only because it was already on it on the computer and the necessary filters are included.”

Lifehacker also cites a blogger who managed to tune out the vuvuzelas by manipulating the equalizer on his Samsung TV. More details are available at Lifehacker’s “How to Silence Vuvuzela Horns in World Cup Broadcasts.”