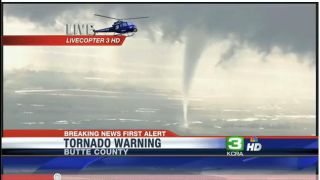 MULTIPLE CITIES: A compilation of television and radio broadcast coverage of the recent tornadoes and their aftermath aired at the National Association of Broadcasters Education Foundation’s Celebration to Service to America Awards on June 6, 2011. The six-plus minute clip shows twisters, panic and a series of TV meteorologists warning people to take cover. One vignette from KCRA-TV in Sacramento shows a live news chopper shot of a funnel from the level of the cloud ceiling. Another shot from an unidentified source shows a twister hitting what appears to be a Mack truck and shredding it into sheets of metal that blow away like tissue paper.

The second half of clip comprises aftermath stories, including stations taking calls from people looking for loved ones, and relief efforts.