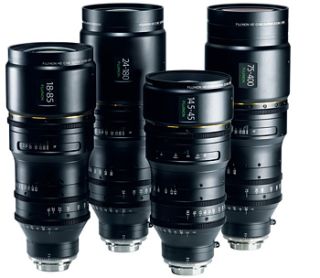 SEATTLE—Primes are single focal length lenses, which can be designed with a relatively few optical elements and thus are capable of transmitting a lot of light to the film or digital camera sensor. This results in a large aperature or f-stop at wide open, providing the shallow depth of field so favored in cine production.

In addition to typically being capable of close focusing, top-of-the-line primes can deliver very high-quality images, due at least in part to the fact that designers can optimize them for the single focal length images they provide.

THE PROBLEM WITH PRIMES

The problem with primes, however, is that each of them is limited to its single focal length. Want a shot that's a little wider or little tighter, and the lens you have been using has to be swapped out for one of its longer or shorter family members. Changing lenses takes time.

Fujinon introduced its latest series of PL Mount Lenses at the 2011 NAB Show. The production of episodic television programs in this high-definition age demands prime lens quality, but such programs usually have to be produced on a rapid schedule that doesn't allow for much lens changing. So directors of photography (DPs) on such series have increasingly turned to what are euphemistically called "Variable Focal Length Prime Lenses," aka, premium quality zoom lenses.

Typical of DPs who have found themselves squeezed in such a time crunch and turning to top quality zooms is Rodney Charters, ASC, CSC, currently shooting the Showtime series "Shameless," but perhaps best known for his camera work on "24."

"Interestingly, with '24' we evolved the handheld shooting style which was very energetic and compatible with the spirit of Kiefer Sutherland's ragged life," Charters said. An accomplished documentary shooter in his earlier career, he said that for "24" "…when Angenieux introduced the close focusing 15-40 and 28-76 lenses, I was able to emulate the close-up work I did on 16mm."

Angenieux, along with Canon and Fujifilm Optical Devices have all come out with ultra-high quality zoom lenses to serve DPs like Charters. To do so, they've broken new ground in the lensmaking trade. Detailing the list of lens technologies they had to optimize would fill a book, but there are some general areas they had to concentrate on. One such area that needed optimization was lens mechanics.

"At Angenieux, our designs for high-end zooms include a superior guiding system for zoom and focus with no bore sight shift when zooming or focusing," said Eva Paryzka sales manager, Cinema Products at Thales Angenieux. "Our advanced optical technology helps to ensure image consistency is retained through the entire zoom range."

"One of the things that allow us to have super high performance is to have a really big lens… a very large front element…that allows us to get an enormous amount of light into the lens," said Thom Calabro, director of marketing and product development for FUJIFILM North America Corporation's Optical Devices Division. This enormous amount of light is partially responsible for the wide aperture on the Fujinon Premier line of zoom lenses.

To provide a range of focal length instead of just one, zoom lenses necessarily have more optical elements. Each time light enters or exits a lens element, some light is lost. Proprietary coatings applied to those lens elements reduce that light loss, contributing to wider maximum apertures.

"The coatings that are put on lenses are highly scientific," said Canon national sales executive Larry Thorpe. "The coatings generate another reflection that cancels the unwanted reflection, or attempts to—it's part of the science to make that cancellation perfect. And today folks in the higher end lenses use very exotic metallic elements for the coatings, and then they are deposited on the lens elements with tremendous precision, and of course that precision must be maintained, you can't really deviate a quarter wavelength thickness to get that reflection quite perfect."

Cross-section illustration of a high-performance HD lens showing the concatenation of many optical elements required to implement all of its desired operational requirements. Diagram courtesy of Canon. Lens makers haven't limited performance of their new high-end zooms to what's necessary for the largest television screen. Their target has been the perfection demanded by a 50-foot theater screen, where imperfections you might not see on even the largest TV are readily apparent on the bigger canvas.

To that list, Thorpe added correcting for such errors as chromatic aberration, which appears as color fringing because of the unequal refraction of light rays of different wavelength, the property that yields a rainbow of color from a prism.

"You're having to compensate for all of those specifications I've listed, at each focal length, at each variable focal length. And that's what the challenge for designers, and of course they resort to contemporary optical design strategies."

A lens designer must be like a conductor directing the performance of all the components in a zoom lens. When one exotic glass element is employed to correct for a particular problem, that new element often introduces another problem, which when corrected introduces another problem, and on and on and on. "The design strategy is sort of manage those so they counteract the distortions and performance falloff loss that you're wrestling with," said Thorpe.

For lens makers, perfection is still illusive. "Designing a zoom lens requires balance between focal length, performance, weight and dimension, among other characteristics," said Paryzka. "Most important, it must serve the purpose for which it is created with the best possible performance characteristics attainable."

For DPs on episodic TV series, these new lenses have provided prime-like performance while allowing them to stay on their very aggressive production schedules.