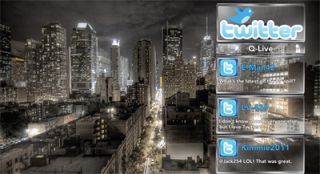 ALEXANDRIA, VA.
The growing popularity of social networking via electronic media by virtually all demographic groups has not been lost on local broadcasters, who are now being given some options to take it to the next level. That next step for an industry that has spent most of its life as a strictly one-way medium with viewers could allow stations to do what no other industry is capable of doing: sharing personal viewer input almost instantaneously with all other viewers via TV broadcasts.

In today's most popular social networking venues of Twitter, Facebook and YouTube, the size of a TV market does not automatically determine viewers' response to local broadcasters' efforts. One of the most popular TV personalities on Twitter is news anchor Amy Wood of WSPA-TV in Greenville-Spartanburg, S.C. (DMA 36). Wood boasted more than 13,000 Twitter "followers" as of July—logging more than 25,000 tweets on behalf of her Media General station, focusing on local news.

A new product from Quest and Miranda Technologies combines Quest’s QLive server with Miranda’s Vertigo XG platform to handle the processing, queuing and censoring of Twitter messages coming in from viewers. News anchor Kris Ketz, who tweets for KMBC-TV in Kansas City, Mo., (DMA 31), has accumulated more than 3,300 Twitter Followers for the Hearst station in the past year. "I wasn't sure what to think of it, since any form of social media was foreign to me," Ketz said. "But soon I found it to be easy… and even fun. I anchor a local morning newscast and found it a great way to talk to viewers during the broadcast."

Ketz also found his Twitter activity to be a reliable source of local tip-offs and usable viewer input. "I've found it to be a much, much faster source of information—especially for breaking news—than the traditional [wire service] which we still rely on. Twitter and Facebook have become great tools that some in our newsroom use on a regular basis," said Ketz. The anchor recently expanded his social networking duties to Facebook, which permits photographs, video and other viewer-generated resources that are not limited to Twitter's succinct 140-character per-message limit.

Chief Meteorologist Pete Delkus of WFAA-TV in Dallas-Ft. Worth (DMA 5) said social networking via Twitter has already proven to be a useful tool during storm coverage. "Between cut-ins on TV I can update people on the storm timing, when they can expect it to arrive depending on where they are, and what type of damage may come with the system. In turn, folks have been great about sharing information and sending in pictures. All of this gives our station more information—which allows us to be more helpful to our viewers," Delkus said.

Now some technology firms want broadcasters to transition into what they see as the next logical step in social networking that appears tailor-made for local television—mixing tweets, MMS (texting), blogs, assorted Facebook content and other viewer-generated data directly into on-air, on-screen programming.

Social TV, a collaborative between Avid and Business Technology, Inc., initiative unveiled at the 2010 NAB Show, is one approach that leverages current mobile technology and standard viewer text messaging. The system, DekoCast, allows a station to display interactive graphics while viewers contribute an array of various social media postings. "At the simplest level, it brings a new way to interact and connect with viewers, which creates [new] revenue opportunities to drive brand sponsorships and increase advertising," said Ernie Jones, account manager at BTi. Stations can also submit breaking local news "in less than four seconds from the field. Now that's news when you want it!" Jones said.

Miranda Technologies and Quest Research & Development are also among those currently working to advance the end-user experience and make it easier for broadcasters to collect, sort and scrutinize incoming material.

The Miranda-Quest system recently had a low-key debut on WNBC-TV in New York (where some of its local media is dubbed "LXTV") for its nightly 5 p.m. newscast. "Live on-air chatting through Twitter and our LXTVlive Web site has enabled us to connect directly to our LX New York audience in a way that was never possible before," said Fabienne Anstey, vice president for operations at LXTV. "Viewers cannot only chime in with opinions as the segments are happening, but also get answers from our hosts and celebrity guests on the spot. It's a truly interactive experience."

Glen Maxheleau, Miranda's product specialist for graphics and playout, said being able to use text messaging and Internet-type data from Facebook or Twitter is becoming more important to stations. "This kind of interactivity will allow stations to increase their viewer bases, as well as their revenues. Broadcasters already are utilizing their Web sites to collect live viewer feedback—so why not take the extra steps required to use these online comments in their on-air product?" Maxheleau said.

Clinton Ash, Quest's president, points out that "traditionally, television and radio were one-way mediums. Now with the advent of these new social media technologies, the broadcast paradigm is shifting from a one-way information flow to a two-way flow [and] stations can actively engage their viewers as never before."

David Schleifer, a former Avid executive who is now CEO of FYItag, a social networking consultancy in Andover, Mass., said many local broadcasters remain cautious about using social networking to any major degree, especially within their branded on-air product. "I think there's been a lot of kicking and screaming and, quite frankly, it's a trend they should get ahead of," he said. "It's inevitable, not a question, that social media is here to stay. I think it's critical for broadcasters and all content producers to learn how to talk to their audiences."

FYItag is planning to launch a product in August designed to help broadcasters manage their social media. (As of early July, it had not yet counted any local stations among its client base.) Its product has been in closed beta testing for much of the summer. "What we're working on will give viewers and broadcasters a way to talk to all the various social media venues at once," said Schleifer (i.e., Twitter, Facebook, YouTube, MySpace, blogs, MMS, chat, e-mail).

"You need to be across many social networks because no single one of them has all your viewers," Schleifer said. "Even Facebook, which is now really huge, still doesn't have everyone you want to reach. So at the back end, we want to streamline the process of directing viewers to all of a broadcaster's assets… and then we aggregate all the responses from an array of social media back into one place."

According to Miranda's Maxheleau, "Smartphones and the Internet are emerging technology when it comes to broadcasting—and it's only a matter of time before they all become part of mainstream media and local newscasts… although [news staffers] will still require control of that on-air content" prior to its transmission.