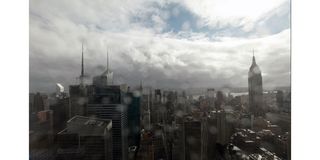 As many as 8.2 million people lost power in the storm, which is being blamed for as many as 35 deaths in the United States and 69 in the Caribbean, according to Fox News. A tidal surge of nearly 14 feet hit New York City’s Battery Park, inundating the southern end of Manhattan and flooding subway systems, reports indicate. Nicholas Carlson, deputy editor at Business Insider reposted this image of the power out in Lower Manhattan from Nick Summers on Instagram. (Unverified.) CBS News ran another image of what appears to be a transformer exploding in the same area.

The New York Stock Exchange and the NASDAQ remained closed Tuesday for the second day in a row. Reports attributed to CNN and Weather.com that the NYSE floor was under three feet of water raced through social media sites, where they were soon disputed. Business Insider said the reports were “totally false.” The Chicago Tribunethis morning reported that the trading floor was undamaged.

Slatereported on how people took to social media to refute other erroneous reporting. However, social media itself promoted false impressions, including one of members of The Old Guard, 3rd U.S. Infantry Regiment, on duty at the Tomb of the Unknowns at Arlington National Cemetery in Arlington, Va. The image went viral and was picked up by major media sites before The Old Guard took to Twitter to say the picture was taken in September. (NBC News appeared to have run the photo and later taken it down at this url: http://photoblog.nbcnews.com/_news/2012/10/29/14782998-undeterred-by-sandy-soldiers-remain-vigilant-at-the-tomb-of-the-unknown-soldier?lite .)

Elsewhere on social media sites, people posted their own experiences of the storm. Amy Schatz of The Wall Street Journal tweeted, “Discovered this morning that despite 50 mph wind gusts, my mailman in Alexandria, Va., actually delivered mail yesterday!” Dennis Wharton of the National Association of Broadcasters gave props to his newspaper deliveryman, who showed up with The Washington Post “as usual,” he tweeted. Jodi Kantor, a reporter for The New York Times, posted this image of a rainbow breaking over Manhattan. NASA Astronaut Thomas H. Marshburn, M.D. posted in image of the storm taken from the International Space Station. Ted McInerney, weekend meteorologist at WIAT-TV posted an image of what appears to be a jet bridge extending into flood waters at LaGuardia Airport in Flushing, N.Y.

While millions communicated via social media, the Internet itself was not immune to the impact of the storm. The Huffington Post resorted to a simplified template after power outages caused problems with the site. Gizmodo went down entirely. “Our New York Data Center is still offline thanks to Hurricane Sandy,” the website said Tuesday morning. Gawker was also taken down and left with, “connect to upstream server timedout.” The site was still offline at 11: 30 a.m. Eastern.

Email servers for TV Technology parent company, NewBay Media, were down Tuesday morning. NewBay’s offices are on 28th Street in New York—the flooding there was said to reach as far north as 32nd Street. Company employees along the Eastern seaboard reported various conditions. Few in Virginia, Maryland and the Washington, D.C. area experienced power outages. One who checked in from Hoboken, N.J. was without power on Tuesday morning, but had cellphone connectivity. Others in Manhattan and New Jersey had not yet responded.

There were no immediate reports of East Coast TV stations going off the air, though cable and cell systems were not as fortunate. B&C’sTodd Spangler reported that Cablevision had “widespread service interruptions” due to power outages. Time Warner Cable also reported power-related service disruptions, tweeting that it had “crews in the field surveying and repairing damage.” Reuterssaid flooding at Verizon’s network operations in Lower Manhattan, Queens and Long Island caused service failures. AT&T network outages were reported by the U.K.’s Daily Mail, which appears to have sourced Twitter. A.W.A.R.E. also sourced Twitter for a report entitled, “Commercial Mobile Alert Service Used Widely During Hurricane Sandy.”

At least two New York-area radio stations went off the air. WNYC-AM remained dark Tuesday mid-day due to flooding at its New Jersey transmitter site. WINS-AM, part of CBS Radio, switched frequencies to WCBS-FM after Sandy damaged equipment, according to The Hollywood Reporter.

New York-area public transportation remained crippled, with flood waters entering seven subway tunnels—flooding some to the ceiling—and two vehicular ones, according to Mark Schubin, engineer in charge at the Metropolitan Opera. Schubin, who lives on West 72nd, said the only damage in his immediate area was a penthouse window getting blown out in the building. He said the TV trucks at the Met were OK and that “pizzerias and hot dog stands” were open.

In the Washington, D.C. area, the federal government was closed for a second day in the row. Limited Metro service was to be restored by 2 p.m. Tuesday, with regular service to resume on Wednesday morning. Amtrak, MARC and VRE train service remained suspended on Tuesday. Greyhound bus service in and out of D.C., Baltimore, Norfolk, Va.; Silver Spring and Ocean City, Md., remained canceled.

As the superstorm moved inland, it dumped rain and snow over the Mid-Atlantic states and snow in regions of West Virginia and Tennessee. West Virginia remained under a blizzard warning, with as much as three feet of snow expected in the mountains. WSAZ-TV, the NBC affiliate serving Charleston, W.V., fired up the generator after losing power at the transmitter site, according to Tom Weeden, engineer at WSAZ sister station WMTV-TV in Madison, Wis. Weeden reported that all was well in Madison, with winds up to 30 miles per hour, and a visual on “the edge of Sandy’s cloud shield.”

Cities as far inland as Cleveland reported storm damage. WOIO-TV reported that a downtown building in the city was being evacuated due to storm damage, which was later deemed “superficial.”

“The president told his team that their top priority is to make sure all available resources are being provided to state and local responders as quickly as possible and directed them to identify and resolve any potential bottlenecks or shortfalls should they arise,” the Hurricane Sandy briefing readout stated. “The President made clear that beyond the immediate lifesaving and life sustaining activities, which remain the primary focus, he wanted his team to continue to focus on what they can do to support state, local, and private sector efforts to restore power and asked the Department of Defense and the Department of Energy to continue to work in support of FEMA towards this goal.”

Please email me with information on TV and radio station disruptions due to the storm ~ Deborah D. McAdams

“Eerie Drive Through NYC Streets After Sandy,” at HLN

“A Global View of Hurricane Sandy’s Life,” satellite imagery from NOAA at Flickr