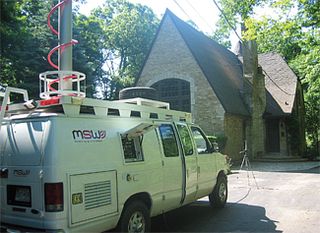 WASHINGTON
As the DTV transition from analog to digital broadcasting marks its one-year anniversary this week, don't expect to see celebration of any type by viewers or broadcasters. Following a decade of preparation and millions of dollars, broadcasters and viewers alike are still working out the issues 12 months after the government-mandated switch.

This is because little has been done to educate viewers on how to best utilize over-the-air (OTA) television since the conversion took place in June 2009. While most viewers know that DTV is available, many do not know what channels are available in their market, or that when properly received, their OTA signal could actually be better than the quality of the signal received via cable. Viewers also may not realize that fixing seemingly poor reception may be as easy as replacing their antenna.

An MSW van tests for antenna reception outside a home. Dennis Wharton, executive vice president of media relations for NAB says that only a small minority of viewers still do not have the signal they received during the days of analog broadcasting.

"Transmission and reception decisions were made by computer modeling and issues have arisen that were not anticipated," he said. This is apparently one reason why many stations have petitioned the FCC to change their channel allocation as well as increase transmission power to better serve their viewers.

Though manufacturers have been very busy selling DTV over the last year, neither they nor industry trade groups such as the NAB, have spent much time or money on continuing education. Wharton says the association focused its educational efforts leading up to the transition from analog to digital.

Wharton explained that much of NAB's role has been asumed by individual broadcasters whom the association feels are best equipped to keep viewers informed and up to date. "Whether a new newscast, HD conversion, or channel transition, local broadcasters are the best at promoting these," he said.

But advocates for consumer education believe post-transition education has been lacking, and that broadcasters are losing out on many potential over-the-air consumers. "No matter what you do at the transmitter site, the viewers can easily undo it by using a lousy antenna or bad placement," said Gary Sgrignoli, a DTV transmission consultant with Meintel, Sgrignoli & Wallace.

Prior to the transition, government, broadcast, and manufacturing groups spent time and money to educate consumers about what to expect come June 12, 2009. Efforts ranged from national commercial spots explaining the digital transition, to government funding being spent on local education. The problem is that these efforts did not last long following the switch and few services—if any—are now available for those who are still having reception issues.

According to a source at the FCC, the commission gave contracts to local groups to provide walk-in educational centers and even in-home assistance programs prior to the change-over. Much of this was done in lower income communities or those that relied more heavily on OTA broadcasting. But the last of the FCC contracts expired August 31, 2009, and according to the FCC no new funding has since been provided for DTV reception or educational programs.

The only source for consumers to turn to in fact is the FCC's own sponsored website, DTV.GOV, which alerts consumers at the top of its banner that "FCC sponsored local assistance efforts have been discontinued. Please call 1-888-CALLFCC for DTV assistance."

Sgrignoli's firm has spent a lot of time in the field consulting with stations to determine solutions for viewer reception issues. He finds that when a DTV station's signals are received properly, the feedback from viewers has been very positive.

"During our field tests we found many viewers liked the picture quality and especially the programming selection available on the sub-channels," he said.

Because of minimal compression, most OTA signals look better on a consumer's set than their cable or satellite counterparts. Sgrignoli also discovered that while many people were using cable or satellite on their main TV, their second and third televisions relied on an antenna.

NAB also has found that more people are migrating toward free OTA reception for their media needs, whether due to the economy or quality of signal issues.

"We are getting a lot of anecdotal information about people cutting the cable and getting their TV with a combination of OTA TV and the Internet by using online services such as Hulu and Netflix," said Wharton. He cited a survey finding that one in eight pay-TV customers expect to cut or reduce services due to the availability of OTA and web-based viewing options.

Due to terrain and/or obstruction issues, some viewers are still not able to get reception even in large markets. "Like with the census, it is impossible to reach everyone," Wharton said.

In an attempt to increase the reception within their markets, many stations have turned to the FCC for a channel re-allocation or a permit to increase the power of their transmitter. The FCC confirms that they already have issued permits to 25 stations to move their transmission signals from the VHF band to the UHF. Some of these were done before the official transition, while others took place afterwards because the stations couldn't overcome reception issues.

The FCC permitted WLS in Chicago to experiment with doubling its power just seven days after the transition, and then a month later the station was granted authority to install a fill-in translator in an effort to reach its viewers. Finally, WLS requested a change from VHF to UHF at the end of July 2009. The FCC eventually granted the request, though not all stations having such issues are as lucky.

Because the FCC has to address the complexity of the effects of a channel change on other broadcasters in the same market, the process can be slow and difficult. The NAB assists member stations, but says the stations often must hire lawyers and engineers to get them past the initial inquiry stages with the FCC.

Efforts to get consumers to use the proper equipment and setup for their homes are also important to solving reception issues. Wharton said that there are many new antennas available for purchase that do a great job, but making the right selection depends on knowing whether your television market is predominantly UHF or VHF.

Sgrignoli hosted a session at the 2010 PBS TechCon detailing the many OTA reception issues his company has seen. He is adamant that consumers need to be better informed about how to best receive OTA digital signals with the proper antenna. When it comes to antenna usage, he has several recommendations for consumers:

Channel changes, increases in power, and new antennas only address the matter of getting the OTA signal to the viewer. But will viewers want to receive it? Some in the industry feel that cable and satellite provide them with acceptable levels of coverage, so fighting for the remaining OTA customers is not a priority. Sgrignoli believes that some broadcasters may see other stations in their markets as competitors, but the fact is that cable, satellite, and the Internet are the ones luring eyeballs away from their content.

NAB sees Mobile DTV as part of broadcasters' future. In May, the industry launched consumer trials in Washington, D.C., and the association is leading the effort to oppose an FCC proposal to reduce broadcasters' portion of the spectrum as part of the commission's National Broadband Plan which would limit the industry's ability to offer OTA services nationwide. Will the fix be a renewed push for consumer education, the successful launch of new uses of the OTA signal, or something as simple as buying a new antenna?