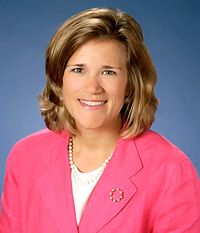 LOS ANGELES
Barbara Lange was named to the post of executive director of the Society of Motion Picture and Television Engineers earlier this year and the recently concluded SMPTE Annual Technical Conference and Expo in Hollywood marked the first such event under her leadership. Ms. Lange was asked to share some of her thoughts on both the conference and the organization.

Q: What were your impressions of this year’s conference and expo event?

A: We are really in the middle of a change in our industry—the transition to incorporate broadband Internet, file-based workflows—all of these traditionally IT-related technologies are becoming more and more a part of our world. This came out at the Monday pre-conference which was all about the digital media ecosystem and the dynamics of these new tools and what this means to the content providers and the consumers. The rest of the conference was a segue from what we know traditionally to what it’s going to be like in the future. The keynote address from Microsoft’s James Baldwin set the stage for that. The majority of the feedback that I’ve received about the event is on the quality of the papers—that’s what people come for and I believe that they got that this year.

Q: As the conference and expo has been in California for three years now, are there any thoughts for moving it back to the East Coast?

A: Last year we signed a three-year contract that will keep us in Hollywood through 2012. One of the things that we will be exploring very soon is to look at some other venues. I think there is an appeal to be out here in this community. We’ve sort of established this as a traditional base, but we know that the East Coast is interested as well. We do have a 3D conference in New York the summer to balance things. But nothing is confirmed past 2012.

Q: Was this year’s conference larger than last year’s?

A: In overall terms of people attending, this was bigger than the previous conference.

Q: This year marked the first time that social media was incorporated into the annual conference. How has the response been to this?

A: It’s been terrific. I’ve heard a lot of people saying that it was great and was what we needed to be doing. The younger demographic is using Twitter and that’s who we’re trying to attract. We were both blogging and tweeting and the impression has been very positive.

Q: While we’re talking about change, what’s happening to ensure the long term viability of SMPTE? It’s a changing world in terms of the fusion of video and film with IT; do you think SMPTE is still relevant? Is it still going to have a place as the video/film/IT connection continues to evolve?

A: I would say that there are three pillars of the organization: standards, education, and networking.

Things don’t work well if you don’t have standards.

We may have to retune ourselves as a result of the convergence with IT, but standards are more important than ever before.

As for the education area, I think in terms of learning such things as file-based workflows, 3D technology—learning about all of these things coming down the pike—it’s an exciting time and the only way that you’re going to know about it is through education and SMPTE is in the right position to help in this area.

As for networking, conferences such as this—and section activities locally too—are able to bring people together and help business move forward. Networking is very important and a very important part of what SMPTE is able to do.

So, I believe SMPTE’s relevance will not only continue, but be even more important in the coming years.

Q: SMPTE is fast approaching its 100th anniversary and few entities manage to survive a full century. What do you see in the way of long-term survivability for the organization?

A: When we do pass the 100 year mark, it will be a new organization that’s very forward looking and very relevant to the community—that’s something that we have to definitely make sure that we do to maintain our viability.

Q: What do you see as the current strengths and weaknesses of the SMPTE?

A: As for weaknesses, there is tradition—tradition is good when you build on it in moving forward, but not so good when you in stay in one place all the time. Many organizations—and SMPTE is not unique to this—are slow to change and I think that this could be a troubling thing. On the positive side the Board is very interested in the future and there are a lot of great plans for taking advantage of the future, but we have to change our focus and how we operate. As for strengths, there’s the quality of the people involved and the commitment that they make—at the Board level and also the Section level the organization doesn’t function without this dedicated volunteer troop and that’s a huge benefit for this organization.

Q: You’re fast nearing the one-year mark of your involvement with SMPTE. What are your impressions after being with the organization for the past nine-and-a-half months?

A: It’s been a hugely interesting and challenging opportunity. For years, the organization sort of happily motored along, but wasn’t particularly business-oriented. I believe that I’ve been able to change some of that with market research, by doing product pricing, and by introducing these traditional business tools to help the organization move forward. Also the approval of new bylaws is really a great opportunity for this organization to be flexible and to change with the times. I’m very excited to be in this position and hope that I’ve been able to show some good progress in the time that I’ve been here, and look forward to doing much more.