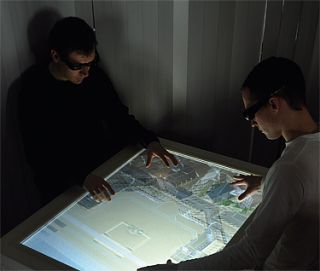 LOS ANGELES
With the theme of "The People Behind the Pixels", the 2010 SiGGRAPH convention is shifting focus from highlighting cutting edge technology to emphasizing the personal creativity behind the digital image creators who express themselves with it. More than 25,000 computer graphics and interactive technology enthusiasts from six continents are expected to converge on the Los Angeles Convention Center, July 25–29 for the 37th gathering of SIGGRAPH to share ideas, meet with experts and view the best in computer animation.

Immersion, a French-based developer of tailored turnkey visual simulation and virtual reality solutions will demonstrate a multitouch multiview stereo solution for collaborative exploration of mockups. The theme "reflects this year's change in orientation from the tools our industry has developed to accentuating the human factor of the creators who use them," said Terrence Masson, SIGGRAPH 2010 Conference Chair and director of game design at Northeastern University in Boston. "Until recently this conference has been about the bleeding edge of radical innovations, so by centering this year's event around the implementation of their application we want this SIGGRAPH to be the most exciting it can be."

To support this theme, a new program called "SIGGRAPH Dailies" will showcase excellence in computer graphics. Up to 35 digital artists will detail the tricks and techniques they use to create recent pieces of work during a series of on-stage evening presentations. The specific creation they are discussing will be looped on a screen behind them to illustrate the processes being explained.

This will also be the third year of the restructured Computer Animation Festival that will now include visual music and real-time rendering as well as depictions of the creative, scientific and technical process of creating films.

"It was difficult to narrow the pool of submissions because of the high level of quality and technical expertise,” said Isaac Kerlow, Computer Animation Festival Director from The Earth Observatory of Singapore/NTU ADM. “Attendees will experience an endorphine rush as they watch the screenings of independent and commercial films, and will get a behind-the-scenes perspective from the planned Production Sessions featuring the visionaries behind some of this year’s most successful Hollywood films.”

SIGGRAPH 2010 is also continuing its expansion into other alternative fields, including robotics, input interfaces, haptics and experimental sensory experiences. "With every passing year, the technologies presented at SIGGRAPH become more and more astonishing," said Preston J. Smith, SIGGRAPH 2010 Emerging Technologies Chair from Laureate Institute for Brain Research. "This year is no different as conference attendees will experience first-hand the latest achievements across science, commercial, and research fields. In some instances, these technologies are making their first public appearance and are coming to SIGGRAPH directly from research labs.”

For many, however, a prime reason to attend SIGGRAPH is the technical papers and keynote addresses.

Jim Morris, general manager and executive vice president of production at Pixar Animation Studios and Don Marinelli, executive producer of the Carnegie Mellon Entertainment Technology Center will present keynote speeches. Marinelli's concerns are about the way interactive media such as gaming is denigrated as the "poor stepchild" of digital content creation.

"My talk will deal with where we are now, where are we going, and what is the extent of our responsibility to convey that what we are doing in the realm of interactive digital media is central to 21st century society," Marinelli said. "For example, in the academic world the concept of video gaming is anathema, and it is up to us to take the initiative to show them how important our work really is."

The SIGGRAPH exhibition hall will include more than 200 companies, schools and service providers spotlighting the latest innovations in computer graphics, displays, rendering technologies and Web design.

The new Desktop 3D Scanner from Santa Monica, Calif.-based NextEngine will show how an economical laser scanner can turn physical objects into digital models for transporting into your favorite 3D modeling software.

NewTek will preview exciting, new features for the next iteration of LightWave 3D. Elements of LightWave with CORE Technology will be introduced as part of NewTek's "from the ground up" creative technology.

Polhemus will debut the fourth generation of their G4 motion tracker, which offers wireless communication and allows up to three sensors per unit—with eight possible units—for a total of 24 sensors. The G4 offers true 6DOF tracking, with the luxury of a compact electronics unit.

"We're glad to say the number of first time exhibitors has increased this year," said Mike Weil, manager of SIGGRAPH exhibit space. "We're seeing a lot of innovation coming from Europe and Asia, and a number of their governments are helping to sponsor their companies' booths at SIGGRAPH 2010, so there will be a lot of new products and services for attendees to see with many of the newcomers emphasizing interactive digital technologies."

To register for SIGGRAPH, visit www.siggraph.org.