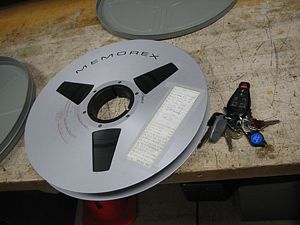 WASHINGTON
This is the last installment of the three-part series, which examined the methodology used to bring color images back from both the Apollo 10 and 11 space missions 40 years ago. This final chapter examines some of the mystery associated with missing video recordings of mankind’s first few hours on the moon.

Three years ago, NASA revealed that it had misplaced some very special tape recordings made during the evening of July 20, 1969, and announced that it was making an all-out effort to locate them before the 40th anniversary of man’s first landing on an extraterrestrial body.

That search has involved thousands of man-hours and spanned several continents. On July 16, the space agency revealed that the historic footage is still missing and is presumed lost forever.

“As far as I’m concerned, the search is officially over,” said Richard Nafzger, a senior video engineer at NASA. Nafzger has been with the agency ever since it announced that it was embarking on video coverage of the Apollo missions back in 1968, and has been heavily involved in the search for the missing recordings.

Richard Nafzger at the July 16 press conferenceHOW IT ALL STARTED

Stan Lebar, the Westinghouse project manager for the special camera used to pick up scenes from the Apollo 11 landing, said that the genesis of the tape search began several years before NASA became officially involved.

“Actually, they had been looking for the tapes down in Australia,” Lebar said. “They found a tape kept by one of the people at the Honeysuckle Creek tracking station there. It was sent to Dick Nafzger at NASA for him to play back, but it turned out to be one that was made a year before Apollo 11.”

Lebar explained that a fairly close-knit group of retirees associated with the NASA tracking station activities in Australia still exists and they asked him to see if he could help unearth the original tapes at NASA’s Goddard facility.

“They sent me a number of photos, mostly Polaroids taken off the screen of the slow scan monitor during Armstrong’s walk,” Lebar said. “The photos they had were exceptionally good, much better than anything I’d seen before. My position was that if you had pictures from a monitor that were this good, the raw data must be a lot better. I then contacted Dick Nafzger. That was in 2006. The Australians had probably been searching for a year or so before that.”

The tapes that became the object of a search on two continents were not ordinary video recordings—certainly not done in the two-inch “quad” standard format used by the world’s broadcasters then. Such two-inch broadcast tapes still exist, as recorded by NASA and others on that historic night. The rather pristine quality images that Lebar referred to represented the direct output from the special 320-line/10 field camera set up on the moon by Armstrong.

In order to make the video available for worldwide audiences, NASA had optical standards converters—basically a 525/60 camera shooting a slow scan monitor screen—at each of the Apollo tracking stations. Due to the crude conversion technology, a lot of the quality captured in even the 320-line “native” format was lost. The photos the Australians sent Nafzger testified to the quality of the unconverted images.

It was necessary to use lowered line/field rate video at the time, as the communications bandwidth between the lunar lander and Earthside tracking stations was limited to a mere 500 kHz at the time of the 1969 mission. However, this reduced bandwidth signal lent itself ideally to being recorded on special instrumentation recorders that existed at the tracking stations.

“These were 14-track, one-inch telemetry recorders running at 120 inches per second,” said Nafzger. “The 14-inch reels held 9,600 feet of tape. It went by in 15 minutes—lots of tape.” As the first lunar surface exploration captured on video spanned some three hours, 45 of these tapes would have been required to store it.

The machines used by NASA were manufactured by the Mincom division of 3M and also by Honeywell. NASA’s Goddard Data Evaluation Laboratory still possesses several operational one-inch recorders for this tape format, and this was one of the driving forces in locating the 14-track tapes. With the digital processing technology developed in the last four decades, it would certainly be possible to extract video from these tapes and provide conversions at a quality level not believed possible in 1969.

These special 14-track one-inch instrumentation recorders are maintained in working condition at NASA's Goddard facility in Maryland should there be a need to recover data from early space missions tapes. ©James O'Neal Nafzger and Lebar began their search on a low-key, unofficial basis, but eventually word leaked to the media and the world found out about the misplaced tapes.

“Dick and I searched for a year on our own ‘off the record,’ but when the press picked up the information, NASA decided that they had better take control,” Lebar said. “That’s when the search officially began.”

Lebar noted that it was during the unofficial search operation that he located two 14-track recordings from the Apollo 9 mission. This was further incentive for keeping hopes alive that similar Apollo tapes could be found.

Records revealed that beginning in the early 1970s, a large number of Apollo telemetry tapes had been “checked out” of the National Archives’ Washington National Records Center (WNRC) located in Suitland, Md. for use at the NASA Goddard facility. The tapes were never returned.

As the number of boxes transferred from the WRNC to Goddard numbered around 2,600, and each of these boxes held five reels of tape, the desired 45 reels amounted to searching the proverbial haystack for a single needle.

“The searching has taken place all over the world,” said Nafzger. “It’s been mainly concentrated in places where records would have been kept—NASA, the National Archives, the National Records Center—but it has reached out much further. We responded to any input that had any validity at all to make sure we covered all the bases. These other sites have included Wright Patterson Air Force Base, the Smithsonian, the Library of Congress, sites in Australia, warehouses in Washington and Houston, the University of Texas.”

Nafzger said that while he didn’t physically travel to all of these potential repositories, he did make sure that the necessary ground was covered at each.

GOING IN A DIFFERENT DIRECTION

Finally, after more than three years of intense effort and a lot of false hopes, Nafzger had to accept the inevitable and elected to move on to a different strategy.

“I decided that it was time to call a halt probably three or four months ago,” said Nafzger. “We had finished writing the original drafts of the official report concluding that they just weren’t there anymore. Most likely the tapes were just degaussed after being evaluated and then put back into service.”

The 40th anniversary (July 16, 2009) of the liftoff that sent astronauts Neil Armstrong, “Buzz” Aldrin and Michael Collins on their way to their record-breaking lunar mission seemed a fitting time to report to the world about the search’s outcome.

Nafzger appeared with Lebar at Washington, D.C.’s Newseum to explain what had transpired during the search and to reveal that, with the telemetry tapes most likely having been destroyed, another approach to better quality video was underway. This has taken the form of bringing in a contractor with a long-established reputation for high-quality restoration of film and video—Lowry Digital in Burbank, Calif.—to do a “clean up” of other recordings made during man’s first stroll on the moon’s surface.

Nafzger said that the four image sources selected for use in the restoration project came from the CBS News Archive; two-inch video recordings made by NASA personnel in a facility set up in Syndey, Australia; 16 mm kinescope recording also made by NASA; and even some 8 mm home movie footage shot off a monitor at the Honeysuckle Creek tracking station. At the time of the press conference, Lowry had been working on the project for a few weeks. Several of the completed scenes the company had been cleaning up were shown to members of the press at that time. The full restoration is scheduled for completion this September.

“The restoration is ongoing and may produce even better video,” Nafzger said. “We’re thrilled with the progress and with the restored video from the best source material obtained.”

NOTHING REMOVED BUT THE NOISE

The missing Apollo 11 video occupied one of 14 tracks on a 14-inch reel of one-inch tape stock. ©James O'Neal Michael Inchalik, Lowry’s president, was on hand with Nafzger and Lebar to offer assurances that the digital restoration process would involve pulling the best available scenes from the best available sources and would not go beyond noise reduction and video enhancement.

“We are restoring and extracting data in the video,” Inchalik said. “Nothing is being manufactured.”

Nafzger cited one scene in which there appears to be a flag pole on the moon’s surface; it’s actually a reflection from one of the lunar lander’s legs. With today’s digital technology, it would be easy to remove such an artifact, but that will not be done in keeping with the philosophy of maintaining accuracy in the existing records of the historic event.

The price tag for the cleaned-up video amounts to $230,000. Nafzger said that he believed the finished product would yield a 30 to 40 percent improvement in quality beyond what is available to historians and others now.

THERE IS STILL HOPE

Even though Nafzger has thrown in the towel on ever finding the pristine one-inch tapes, there is still a chance that the missing 320-line video still exists elsewhere.

He explained that it had recently come to light that other recordings of the slow scan video had been made during the moon walk.

“At the Parkes [Australia] facility, we discovered that there had been some Ampex helical two-inch recorders that didn’t make sense (in connection with the project),” Nafzger said. “We investigated and found records that a (fast-track) program had been initiated while I had been on travel. The Johns Hopkins University Applied Physics Labs were to record slow scan video on some modified video machines. That was accomplished and I’ve talked to retired engineer who did the recordings.”

Nafzger said the tapes were tracked back to the Applied Physics facility in Maryland, but that due to their special nature, had not been stored with other magnetic recordings there.

“We don’t know where they are; it’s still a puzzle as to where they went, but we are continuing to search for them.”

Nafzger added that just as with the one-inch instrumentation tapes, there is still an operational video recorder available for playing back the helical scan tapes, an Ampex VR-660C, which probably dates back to 1963.