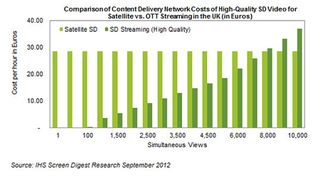 The cost of OTT service will climb to the point that it becomes uncompetitive if the service is scaled up to meet the demands of a large number of people engaging in average TV viewing behavior, according to a detailed analysis released in mid-September by IHS Screen Digest.

The finding, part of an IHS Screen Digest Insight Report, points to the real possibility that OTT providers like Netflix may find it necessary to change their business models, such as building out their own distribution infrastructure just as pay-TV providers have done.

However, doing so will cause the disappearance of their pricing advantage over cable TV, telco TV and satellite TV providers, and actually set up a situation in which OTT service providers are less competitive, according to the report.

“To serve the viewing needs of a mass-market audience, the content delivery network (CDN) costs for OTT streaming services would have to fall by a factor of as much as 25,000 just to reach parity with the most efficient broadcast technologies,” said Guy Bisson, research director for television at IHS.

“At current prices, it would cost 1.2 billion euros ($1.55 billion) in CDN costs alone for OTT unicast streaming to serve the population of the United Kingdom with the kind of HD viewing they are accustomed to,” he said. “For the same price, 5000 linear channels could be broadcast, nearly 10 times the number actually serving the U.K. today. When OTT unicast streaming services like Netflix are scaled up to suit the mass-audience television market, their advantages in cost, flexibility and technology turn into disadvantages.”

The IHS Screen Digest conclusions echo the case broadcasters have attempted to make to the Federal Communications Commission regarding inherent bandwidth efficiency of the one-to-many architecture of their digital over-the-air television broadcasting system.

In the case of the IHS Screen Digest findings regarding OTT service, the unicast nature of over-the-top distribution means there are no efficiencies gained as new viewers are added. With the unicast model, even if everyone watched the same program and started and stopped at the same moment, there are not efficiencies gained. A thousand OTT unicast viewers will need 1000 different streams, even if the streams are identical.