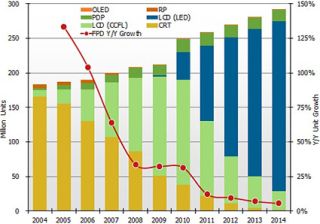 Just over 2 million 3DTV sets were sold worldwide in the last quarter of 2010, but that figure is expected to rise to 100 million by 2014, comprising more than 50 percent of revenues, according to research firm DisplaySearch.

Figure 1: Worldwide TV Market by Technology. Source: DisplaySearch Quarterly Advanced Global TV Shipment and Forecast Report The healthy penetration of sales of 3D-capable sets will first be attributed to full-featured sets, accounting for 30 percent of 120Hz+ LCD TV sets in 2011; but 3D penetration will quickly move into more basic models over the next several years. Plasma TV, which enjoyed a 30 percent increase in sales in 2010, now accounts for about 17 percent of 3DTV sales in 2011. DisplaySearch is now tracking and forecasting 3DTV shipments by technology, size, resolution, frame rate and backlight type, all broken down by region throughout its “Quarterly Advanced Global TV Shipment and Forecast Report.”

The report also noted that as more consumers replace their CRT-based TV sets with new flat panel TVs, the growth rate of these sets is slowing worldwide.

In 2010, total TV shipments worldwide grew by yearly 18 percent to 248 million units in 2010, but that growth is expected to decline to less than 4 percent in 2011 as slower price erosion cools demand in developed markets according to the firm’s “Quarterly Advanced Global TV Shipment and Forecast Report.” While the growth rate has slowed for developed countries that have already strongly adopted flat panels, the total TV market will increasingly be defined by the replacement of CRTs with flat panel TVs in emerging markets. On a unit basis, sales of flat panel TVs grew 32 percent in 2010 but will slow to 12 percent in 2011.

“As the household installed base for flat panel TVs increases above 50-60%, the growth rate slows, which is currently the situation in Japan, Western Europe, and North America. Emerging markets, however, are still ripe for sustained growth due to a low level of household flat panel TV penetration,” noted Paul Gagnon, Director of North America TV Research for DisplaySearch.

Within the LCD TV category, several key features are gaining share as cost premiums decline. LED backlights will account for about 50 percent of the total LCD TV units shipped during 2011, penetrating a large number of screen sizes, especially above 40 inches. Larger screen size sets are usually fully featured and focused on performance. As a result, performance-oriented features like high frame rate and 1080p resolution have much better penetration among larger screen sizes. 120Hz and higher refresh rates will account for about a quarter of total LCD TV units in 2011, but for 40-inch+ sizes, the share is more than 60 percent.

The report can be purchased here.