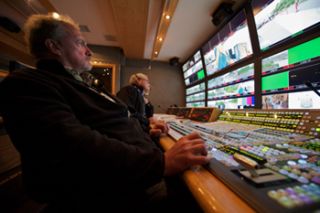 Crown Princess Victoria was recently wed in a lavish ceremony in her native Sweden. For those without invitations, the entire day’s event was recorded and broadcast live, with some help from Grass Valley.

Over 60 LDK 8000 cameras were in use that day, capturing the day’s events as well as the 1,000+ assembly of guests, including European heads of state and other world leaders.

The ceremony was Sweden’s first royal wedding in over 30 years.