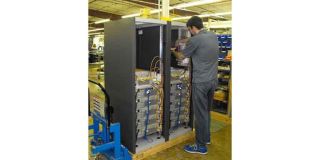 HACKETT's COVE, NOVA SCOTIA and QUINCY, ILL.: Two well-established radio equipment manufacturers are diversifying their product portfolios to include television as a way to capitalize on future international growth. A Nautel logo emphasizes the addition of television to its lineup. Nautel and Broadcast Electronics each have made announcements related to TV transmission products in the face of soft domestic sales.

The separate moves coincide with a recent announcement that Harris Corp., which is active in both TV and radio transmitter manufacturing, is selling off its Broadcast Communications Division. But BE and Nautel each say its own developments have more to do with long-term strategy than short-term market share opportunities.

Nautel believes the television space is a natural progression for the company, said Chuck Kelly, director of sales.

“In the last five years [Nautel] has grown a great deal. Our market share has grown considerably even as the market itself has fallen back some. We can absorb the peaks and valleys of the market, but this allows us to broaden the base by adding more products. That is what TV accomplishes for us.”

Nautel demonstrated its NT100 TV transmitter at IBC. Nautel employs 175 people at its headquarters in Hackett’s Cove, Nova Scotia, and another 25 in Bangor, Maine. The company, under new ownership since the fall of 2011, is still evaluating whether to add employees because of the market expansion.

Kelly, heading up Nautel’s television project, said clients have asked the company to get into the TV side of the business. “Our customers who deal in radio and TV have told us they are worried about the financial stability of TV equipment manufacturers. At the same time, there is a lot of room for growth on the TV transmission side of the business. We put a lot of time into listening to our customers.”

Nautel plans a full line of TV transmitters, including high-power products; but radio will remain Nautel’s main focus and will continue to be “what we think about all the time,” he said. Though U.S. radio in general faces increased pressure for listeners from new online and satellite-based competition, and radio saw its revenue fall in 2008 and 2009, since that point the growth in radio advertising revenue has been steady, Kelly said.

“Online media face challenges in the future as the existing mobile data networks move to a cost for usage model, while free over-the-air radio allows increased and higher quality content choices. Thus, we believe in the long-term viability of the radio business both in North America and worldwide.”

Nautel is working with several companies on the television project, Kelly said, including Denmark-based ProTelevision Technologies and a South Korean component maker. He declined to say where the company’s television transmitters will be assembled.

“We have worked and cooperated with several other organizations on this project. The modulator is coming from ProTelevision, which is well respected. There are components in the transmitter coming from South Korea as well.”

Nautel will incorporate technology it has developed, like its Advanced User Interface, into the TV side, he said.

Kelly said Nautel timed its announcement to coincide with the IBC2012 fall conference in Amsterdam.

“That allowed us to take what in effect was a concept car to the show to gain feedback and get broadcasters’ impressions of the new TV transmitter. The [IBC] has high visibility in parts of the world yet to be built out on the television side.”

Nautel plans to market the NT100 TV transmitter in the United States as well as abroad. The fact that the Federal Communications Commission has set a September 2015 deadline for LPTV and TV translators to end analog television transmission and convert to digital played a role Nautel’s timing, Kelly said.

“We’re approaching the TV market globally, but yes, the opportunities in the U.S. are an important part of that strategy.”

Separately, Broadcast Electronics, which makes FM and AM transmitters and studio automation systems, among other products, recently entered a strategic partnership with television transmission equipment designer and manufacturer Larcan. Under the plan the companies will cross-sell each other’s products. Combined the companies can provide a full portfolio of radio, studio automation and television broadcast solutions, BE officials said.

“For us there is strategic value. The DNA of a TV transmitter and a radio transmitter is virtually identical,” said Broadcast Electronics President and CEO Joseph Roark. “Ninety-five-plus percent of a transmitter’s hardware is the same. For us, getting into new markets and broadening our exposure and increasing our opportunities for bids, especially with governments, is so substantial we recognized we had to enter the market.”

Jason Rouse, BE assembler, finishes the build of a 5 kW STX LP main/alternate radio system before transferring it to the test department. Roark said there are only two significant players that do anything similar on a global stage. “That is Rohde & Schwarz out of Germany, and Harris.”

Larcan, based in Ontario, Canada, is known especially for low-power offerings in North America, Roark said, with substantial market share in that segment of the business. He said Larcan has broadened its scope and range of products recently to include a range of high-power solid-state digital transmitters available in air- and liquid-cooled models to serve various global standards.

BE and Larcan will continue manufacturing their respective radio and TV products, Roark said.

Roark described Larcan’s “culture” as similar to BE’s in terms of attitude and approach to business. “Both have a strong commitment to our customers and apply a lean business approach with a focus on innovation, quality, delivery and cost as being paramount in our methodologies.”

“BE continues to spend millions per year on R&D on hardware and software development, including a new social media company, Commotion, which will allow our customers to actually monetize their use of streaming, Twitter, Facebook, their website or any other form of electronic communication,” he said.

“This is all part of [BE’s] strategy to evolve and expand the breadth of services and products that our customers need to be successful.”

BE is privately held and doesn’t release earnings or publicize its number of employees. The company, based in Quincy, Ill., believes all radio and TV equipment suppliers have seen sales declines this year. “The equipment industry has seen substantial declines in domestic activity due to both macro-economic issues and our customers’ focus on acquisition opportunities made more affordable by cheap money and lower multiples on radio station properties,” Roark said.

“In general, the radio market has been quite soft domestically. There was a boom from 2005–2007 with HD Radio transmitter sales,” Roark said. “but today, most companies are only buying replacement equipment when they have no other choice, as their cash is being committed to acquisition activity and debt repayment.”

“This is true in transmitters, but also the ancillary products, antennas and towers. There is still domestic business to be had, but it is a fraction of what it used to be for all equipment manufacturers and service providers. We believe there is an ever-growing, pent-up demand for equipment that continues to be deferred due to acquisition spending; but the day will come when equipment must be replaced, not repaired.”

The international market is where growth has been significant, Roark said, in hardware, software and ancillary equipment.

“Our business model has gone from 60 to 70 percent domestic, to 70 to 80 percent international. Our distribution reaches over 130 markets around the world and we expect continued growth as nations continue their broadcast infrastructure buildout, whether it be analog or digital,” Roark said.

“Even international has slowed a bit this year because of the European debt and banking crisis as well as political unrest in historically strong markets.”

Larcan CEO Steven Bell stated in a press release that the company is excited to partner with BE, “to drive the companies forward for innovation internationally.”

Meanwhile, some observers speculated that BE and Nautel see Harris’ decision to sell its equipment division — including its TV and radio transmitter manufacturing operations — as an opportunity to gain their own market share in television. Harris has said it hopes to announce a sale by the end of this year. The company has indicated it prefers to sell that entire division intact.

BE has said it explored purchasing pieces of Harris Broadcast. Nautel declined to comment on whether it had approached Harris about buying the broadcast equipment division.

Mary Ann Seidler, director of North American sales for transmitter company Elenos USA, said other companies may think this is a good time to steal market share from Harris.

“I can’t speak for BE or Nautel and can only guess to the timing of this news,” she said. “It’s interesting to see others get into TV. [BE and Nautel] have a business philosophy they are following.”

Elenos earlier this year expanded its business presence in the U.S. and Canadian markets. Seidler said Elenos will continue to focus specifically on FM radio.

Asked for comment about the Nautel and BE news, one Harris executive said the global conversion to digital is providing a growth market sure to attract new players.

“Making an investment in the mission-critical infrastructure of digital television is a task that our customers don’t take lightly,” said Rich Redmond, vice president of product management and strategy, transmission systems for Harris Broadcast Communications.

“Broadcasters look for companies with a long proven track record of solid deployments, technology leadership and a global service and support system that is prepared to assist throughout the transition and long after its completion,” he said.

Many DTV broadcasters are looking for a total solution that extends far beyond the transmitter, from content creation through multi-channel delivery, which requires an entire suite of hardware and software solutions, Richmond said.

“There is certainly a long-term viability for this space,” said Redmond. “Globally, more than 80 percent of TV viewers watch over-the-air television, and less than half of the world’s countries have converted to digital. Government mandates are in place for more DTV conversions, and that process will continue for years to come.”

“We are especially beginning to see opportunities internationally for DAB — one early project being in Norway, where they are shutting off FM signals and converting to DAB radio nationwide. So we see many attractive opportunities in TV and radio transmission now and moving forward.”

Norway is the only country that has set a hard date for radio platform switch-over from FM to Digital Audio Broadcasting (DAB), according to several websites and blogs including followthemedia.com.

“When first announced by the Culture Ministry in February 2011, the plan was for all national radio channels to vacate the FM band in 2017,” according to the latter site. “Those commercial channels with licenses up for renewal before that date could only retain FM transmission through 2017 on agreement to take on DAB transmission.”

Norway, which selected DAB and the Eureka-147 family of standards that also includes DAB+, will begin shutting down analog FM in 2017 “pending reaching their country-wide coverage targets by 2015, which they are on track to do,” Redmond said.