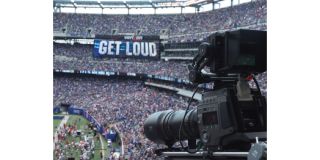 NEW YORK— While broadcasting to the home viewer in 4K resolution is some years in the future, Fox Sports is already using a 4K camera as part of its “A-Game” NFL telecast retinue. The excess resolution (to a 720p production) supplied by the Sony F65 digital cinematography camera is critical to the sports network’s “Super Zoom” feature.

The camera is tied electronically to a “Vortex” system developed by PsiTech, a provider of high-speed digital video technology, and deployed in the OB truck. “We can move it around, zoom in where we want, and extract the particular piece of that 4K that we want,” said Jerry Steinberg, senior vice president, technical operations, of Fox Sports. Because the resolution from the Sony F65 is nine times that of the telecast’s 720p frame, the operator can zoom in to 1/9th of the frame during replay and still supply crisp, in-focus video.

“If the original shot showed a full player, head to foot, you could probably get to his feet and read what’s written on his shoes,” said Steinberg.

5-GIG PAYLOAD
Because the F65 is designed to operate as a stand-alone camera, recording to a RAW recorder, “we’ve added a CDU unit to it for this application,” said Rob Willox, director of marketing, Large Sensor Cameras at Sony Electronics.

He said the total data payload coming out of that camera at 60p is 5Gbps.

John Kerr, president of PsiTech, described the video path from camera to production trailer. “That [5Gbps] gets crunched down onto a single fiber and sent down, all around the stadium, into the video truck. The data is translated into multiple wavelengths on the same fiber so we only have to use a single resource down from the camera site.” A second fiber run “has a whole bunch of control signals to a bunch of control interfaces.”

PsiTech’s Vortex is the latest in a series of high data rate camera capture systems from the Fountain Valley, Calif.-based company. “It actually grew up in the government test and evaluation arena,” said Kerr, “where they wanted to be able to get just lots of data to look at, evaluate whatever they were evaluating in crashes and explosions and whatever else they might want to look at.

“And so in this case we had to configure it for the Sony F65. We then have done some custom work for Fox to give them this particular Fox Super Zoom effect.”

The F65 is fitted with a Fujinon cinestyle zoom lens with zoom and focus controllers familiar to an OB camera operator. It also sports a studio viewfinder.

STADIUM LOCATION
Where in the stadium to locate the Super Zoom camera is still a work in progress, according to Steinberg. “The questionable plays are usually: ‘Is it a catch, was it in-bounds or out-of-bounds?’” The camera has been located in the end zone, on the 50 yard line, or on the 50 from a reverse angle. “Wherever the director wants to put it.”

Kerr pointed out that it is critical to the system that there is no compression of the F65’s RAW video output on its way to the Vortex. “If there’s any compression, as we zoom in, we will start suffering from that compression,” he said. “We store all the data from the camera, and then we play back from all that data and do our processing on the output. By the time we do our extraction, we are giving the viewer the best possible view of that data.”

Deciding where in the stadium to locate the Sony F65 camera is still a work in progress, according to Jerry Steinberg of Fox Sports. The Super Zoom playback operator controls not only where to zoom, but also playback rate. “And that becomes sort of a ‘style thing’ for the replay operator,” said Kerr. “We’ve had operators who like slow motion, we’ve had operators that like regular motion, we’ve had some that like to be able to step it, so it shows the foot’s on, foot’s off, foot’s on, foot’s off. So it’s really a style thing for the operator. The good news is the system gives them the flexibility to do it the way they feel is the best.”

The video replay from Fox’s Super Zoom is available to the NFL game’s referee during a challenge, and Kerr pointed out it had a decision-making effect already in one game, the second week of the season this year:

During a challenge at the Tampa Bay Buccaneers-New York Giants game at Giant Stadium, none of the other camera angles showed definitively whether the receiver crossed the goal line inside the outside the sideline pylon. “Did the Tampa player step on the line before he got to the end zone? At the last minute, as he’s falling over the goal line, he gets pushed outside the pylon, and the ball never crossed over the goal line inside the pylon,” Kerr said. “Both of these things were just not visible from other cameras, and not visible unless we could zoom in on them the way we did.

So what’s next? According to Willox, a new version of the F65’s software will allow Fox to supply its 4K video at 120 progressive frames per second, which will provide smoother slow motion playback.

Can PsiTech’s Vortex handle the doubling of the data? “The system is a generic, high-data rate system,” said Kerr. “Within some parameters we’ll have the capacity to absorb that. Certainly at some point we end up having to add more channels, add more storage, but we’re hoping that we’ll be able to run the higher frame rate without having to change too much the hardware that Fox already has.”