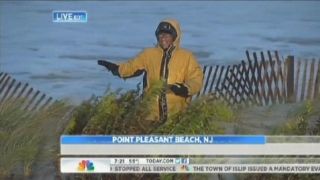 While over-the-air television broadcasters continued to function around-the-clock during coverage of Hurricane Sandy, the devastating storm wrecked cell phone towers, cable systems and wireless communications for 10 northeastern states. Service was still being restored nearly a week later. This was a seminal moment for broadcast technology as well, as reporters used microphones, camcorders and other devices live on the air despite horrendous conditions of excessive water, wind, no external power — and, for the most part, everything worked reliably.

Wireless cellular services didn’t fair quite as well. The FCC reported that the massive storm knocked out 25 percent of wireless mobile towers and a fourth of all cable service in the 10 states. Verizon Wireless, AT&T, Sprint Nextel and T-Mobile USA reported service problems in about 158 counties from Virginia to Massachusetts.

By midweek, the number of cable, telephone and broadband disruptions were reduced to “well under” 20 percent, an FCC spokesman said. Service was slowly being restored on a region-by-region basis.

Thanks to a series of back-up generators and viewers with portable digital TV sets, vital information continued to be distributed despite the harsh conditions. Indeed, local broadcast stations in New York City, Washington, Philadelphia, Baltimore and Boston reported the story with little disruption. Only a few suffered technical glitches. In many cases, news employees were called in for the duration of the storm. It was all hands on deck, and stations’ staff responded.

“Everybody left home on Saturday prepared to be gone for five to seven days,” Michelle Butt, news director at Hearst’s WBAL-TV in Baltimore, told The Baltimore Sun newspaper. “You don’t stop covering the storm just because the sun comes out.”

Stations that streamed their live coverage on websites and mobile apps reported heavy traffic. For example, WPVI-TV in Philadelphia, the ABC O&O, achieved 13.1 million page views across mobile and desktop on Oct. 29 (a single-day record) and had more than 9 million page views on Sunday, Oct. 28th.

During the storm, a “small number” of 911 call centers, whose locations were not revealed, went out of service, but most of their traffic was re-routed to others centers, FCC chairman Julius Genachowski told reporters in a conference call. Some of those re-routed were to centers without electronic location information telling the cell center where the call originated.

The call centers are the responsibility of the phone companies to maintain. It was the second time since this June that 911 service has faced weather-related failures. In the summer, it was from a violent wind and thunderstorm, which knocked out service for about 1 million people in Northern Virginia.

“Our assumption is that communication outages could get worse before they get better,” Genachowski said last week. That’s because cell towers running on backup generators went down before electrical power was restored.

Utility companies estimated by mid-week that as many as 8 million customers were without electricity, and it could be several days or even weeks before restoration of service. Flooding or snow damaged other cell sites.

Verizon reported six percent of its cell sites down, while T-Mobile reported 20 percent of its network in New York City alone was out of service. AT&T would not give the status of its system.

Verizon, based in New York City, had flooding at three central offices with telecommunications equipment in Lower Manhattan, Queens and Long Island, Reuters reported. Its downtown headquarters, which serves most of Wall Street, had 3ft of water in the lobby.

Network and series television production in New York City, knocked out by the storm, gradually came back by week’s end. Universal Television’s 30 Rock went back into production on Wednesday, and "Smash" and "Deception" in New York and "Do No Harm" in Philadelphia resumed production on Thursday.

David Letterman taped a couple of shows without a studio audience at his CBS theatre in midtown Manhattan. Comedy Central’s "The Daily Show" and "The Colbert Report" resumed taping Wednesday night after being shut down.

“Overall, the condition of our communications networks is improving, but serious outages remain, particularly in New York, New Jersey and other hard-hit areas,” Genachowski added. “We are continuing to work closely with FEMA and our other federal, state, and local partners — as well as communications companies — in response efforts.

“In the days and weeks ahead, we will continue to expect the unexpected as the full picture of Hurricane Sandy’s impact on communications networks develops," Genachowski said. "The crisis is not over. We’ll continue to be intensely focused on helping with the full recovery of wired and wireless communications infrastructure.”