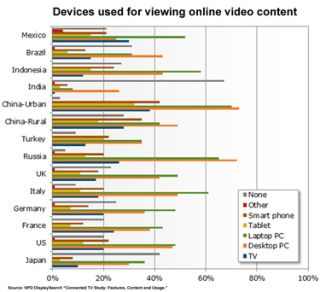 Nearly one out of five consumers in 14 countries access online content every day with their televisions, according to a new report from NPD DisplaySearch.

The report, “Connected TV Study: Features, Content and Usage,” found consumers increasingly prefer to view online content of their own choosing, at their own time on their preferred device. The study found that 18 percent of consumers surveyed in 14 regions are accessing online content daily on their TV sets.

Online content is mostly viewed on computers or mobile devices, such as tablets and smart phones, but TVs are increasingly becoming devices of choice for consumers, particularly since an increasing number of sets have either built-in connectivity or can be connected to the Internet via a peripheral device, such as a connected Blu-ray player or STB, among others,noted Riddhi Patel, NPD DisplaySearch Research director of Consumer Insights.

In fact, 25 percent of consumers surveyed said they view online content on their TV several times a week. Movies are the most popular source of entertainment for consumers viewing Internet content on TVs. Consumers prefer to watch movies in a social setting, and since movies are available via online sites, they have become the most preferred content.

Broadcast video programming available online also has gained consumer attention. It offers a ways for consumers to catch up on daily programming that they miss when it was originally broadcast.

Among consumers who do not view online content via TV, 44 percent said they have no interest in viewing that content on their TVs, and about 30 percent indicated they simply do not own the necessary devices. Of these respondents, if given the possibility of viewing online content on their TV, only a third said they would be interested in doing so.