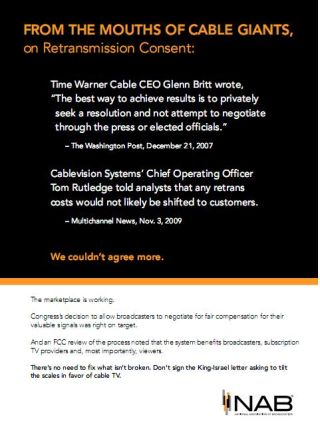 “The best way to achieve results is to privately seek a resolution and not attempt to negotiate through the press or elected officials,” TWC chief Glenn Britt is quoted saying to The Washington Post.

An observation that retrans costs would not likely be shifted to customers is attributed to Cablevision’s chief operating officer, Tom Rutledge, as reported by Multichannel News.

The ad represents the latest volley in an escalating battle over retransmission consent law. The law allows broadcasters to charge cable and satellite operators fees for TV signals. Additional legislation prevents those pay TV providers from carrying the signal of another station when talks break down.

Carriers are fighting tooth-and-nail to alter a provision in retransmission law allowing broadcasters to pull signals when contracts expire during negotiations. The Federal Communications Commission has elected to leave retrans as it is, but the cable industry is petitioning the agency to open the issue for a rulemaking.

The NAB ad implores lawmakers to not sign a letter circulated by New York Congressmen Steve Israel and Peter King calling for reform.

“There’s no need to fix what isn’t broken,” the NAB ad says. “Don’t sign the King-Israel letter asking to tilt the scales in favor of cable TV.”