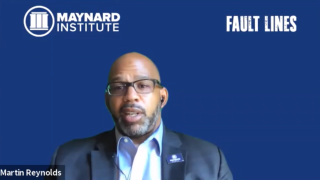 WASHINGTON—The United States (and the world) have been profoundly impacted by the killing of George Floyd, leading to a renewed effort to promote diversity, equity and inclusion (DEI) while at the same time battling systemic racism.

“It’s time to get real folks,” said Martin Reynolds, co-executive director, External Affairs and Funding, for the Maynard Institute for Journalism Education, during a recent NAB-organized panel on the issue. “None of us created this system that we are in, but the reality is that this is an opportunity to really make some change around the systemic racism that exists within our society and the inequities that exist.”

There have been diversity pushes in the past—Duke and Wertlieb both spoke briefly on DEI efforts that the NAB and Hearst have taken in the last couple of years—which Tapia acknowledges can lead many to worry whether the most recent outreach efforts are different. However, research Wertlieb has conducted has led him to believe that there is something “palpably different about this.”

So, how can broadcasters and media organizations help push progress on diversity, equity and inclusion? Wright stressed that any change has to be ongoing—“perhaps never ending”—but also provided insight into how to implement effective strategies. Some of the key ideas include having ongoing communication with employees and a solid understanding of your organization as a whole, as well understanding that there is also a need for change management, which requires buy-ins from the highest levels of the organization.

Wright also offered tips on what to avoid when building a strategy, including just appointing a single individual to handle all aspects of DEI, which could lead to problems if they leave the organization; kicking off a campaign with a big splash but lacking in follow-ups; not measuring progress; not sharing insights with staff; and only focusing on the diversity numbers and ignoring other efforts throughout the employee lifecycle.

Another issue that Wright listed that Reynolds also touched on is that DEI efforts have to go beyond race to include multiple areas of social tension, including race, class, gender, generation, geography, sexual orientation, religion and ability.

One area that broadcasters and journalists are particularly suited to help in these efforts is how they cover communities. Reynolds discovered in recent training sessions that news organizations are viewed by some as “sustainers and facilitators” of systemic racism, but that having and acknowledging great diversity can lead to more trust.

“We must meet the moment. There is an opportunity here, there is a reckoning here where change can be made,” said Reynolds. “Us not meeting this challenge puts our nation in peril. And so I think rather than looking at it with fear, let’s look at it with opportunity. … You all, the folks on this call, are more positioned than anyone to make that kind of transformation, so do it.”