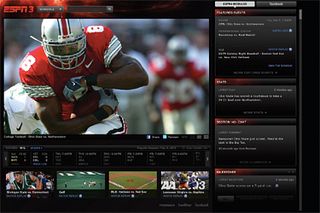 OTTAWA—Thanks to the advent of the Internet and mobile broadband, the term "TV broadcaster" is becoming an oxymoron. Today's broadcasters have to serve content to air, cable/satellite TV, the Web, iPhones, iPads, Blackberries, Androids, and whatever other new platform is winning public usage.From a management standpoint, "multi-platform distribution" is a new frontier. In response, TV stations and networks are devising their own unique approaches to the multi-platform universe.

WLTZ: DIGGING INTO THE WEB

Nami Dockery, Web Content Producer for WLTZ SagemoreHill Broadcasting's WLTZ in Columbus, Ga., is a small market operation. "We have two DTV stations; our NBC affiliate on channel 38.1 and our CW affiliate on 38.2," says WLTZ General Manager Drew Rhodes. "We have Web pages for both, with our NBC page being used mainly for local news."

As a small operation, WLTZ doesn't have a lot of money to serve multiple platforms. "So we have a dedicated Web person who serves as a jack-of-all-trades to get our content online, and everyone else pitches in," Rhodes said. "For instance, our reporters post their video scripts to the Web as news copy, and post clips as well. They also send out messages on Twitter as their stories unfold, to keep our viewers on top of things."

Facebook is a big venue for WLTZ. "Every reporter has their own Facebook page, and it is their responsibility to keep it current," said Rhodes. "This is a neat way for them to interact with our audience and keep them involved." As for the future? "We are talking to people on our staff with niche interests that we can convey to the Web," he notes. "For instance, our production manager knows everything about local high school sports, even though he doesn't report on-air. So we are going to give him a space online, where his expertise will attract viewer interest and interaction."

These days, Meredith Corp.'s WGCL-TV brands itself as CBS Atlanta. It's a positioning that reflects the station's commitment to be seen as a content producer available on a range of platforms, rather than just a TV station with Web and mobile broadband content. Meredith Corporation calls this approach a "flat digital/newsroom structure." The company is deploying it at other Meredith stations, including KPDX in Portland, Ore. and KPHO in Phoenix.

By taking this approach, CBS Atlanta can focus on targeting distribution venues as they become popular. Responding to the growing popularity of smartphones, Steve Schwaid, director of news and Digital Content for CBS Atlanta (and newly appointed vice president of digital content at the Meredith Stations) said the station is "making it easy for new smartphone users to access content designed for their specific phone. They just text us, and we automatically direct them to the appropriate mobile site for their device. This way, we get to them first, before our competition does."

ESPN360, the sports giant's online broadband network Becoming a true multi-platform broadcaster has changed the way things work in the CBS Atlanta newsroom. Reporters now write for the Web and mobile as well as TV, and to make sure that all platforms receive full priority during their shifts. "We use Twitter and Facebook, and we push weather alerts out by iPhone," Schwaid says. "We also watch our staff to make sure they are filing to the Web and mobile, and if they aren't, we ask why."

Although CBS Atlanta is willing to provide extra training to staff members struggling in the multi-platform world, Schwaid views this as a temporary measure. "In the 21st century, you have to be able to work as a multi-platform journalist," he tells TV Technology. "Ignorance is no excuse. Very soon, ignorance on the part of TV reporters will mean no job."

If the multi-platform universe hadn't occurred of its own accord, ESPN might well have invented it. "This is because our goal is to serve our fans wherever they may be," said John Papa, ESPN's vice president of strategic program planning in Bristol, Conn. "Today's multiple platforms allow us to do just that. We can provide games on our TV channels and our streaming site ESPN3.com; news and information on ESPN.com and our mobile broadband sites. So wherever our viewers may be, we are with them."

Papa and his staff are responsible for coordinating all of these different platforms with EPSN's various production units. "We work 24/7 to select the events for our distribution channels, and determine how best we can serve out news and information to the Web and mobile," he says. "Again, the goal is to play to the strengths of each platform, and also to the ways in which people prefer to use them."

As for the future? Whatever new platforms arise, ESPN will be sure to integrate them into its "we're everywhere" approach. "New opportunities are constantly arising, and we are always on the lookout for what's different and compelling," Papa says. "As our fans move to new devices, we'll keep up with them."