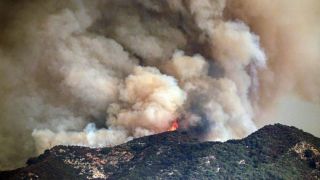 LOS ANGELES—Communication towers for TV, radio and government agencies on top of Mount Wilson have thus far been protected by firefighters from the Bobcat fire currently ravaging the Los Angeles County area.

According to multiple reports, the fire came within 500 feet of the historic Mt. Wilson Observatory and what is estimated to be $1 billion worth of transmission towers on Tuesday, but firefighter prevention methods have thus far kept flames from reaching the area.

Had the fires reached the towers, L.A. County Fire Capt. David Dantic said there was a possibility for service disruptions.

The Mt. Wilson Observatory is also a historic site for the development of astronomy, having been originally built in 1904 and at one point serving as the home of the world’s largest telescope.

While the area is protected for the moment, evacuations are taking place for residents in both nearby Arcadia and Sierra Madre.

The Bobcat fire has charred 41,773 acres as of Wednesday morning, while containment is at 3%.

For more information on the Bobcat fire, read stories from the Los Angeles Times and LA’s ABC7.