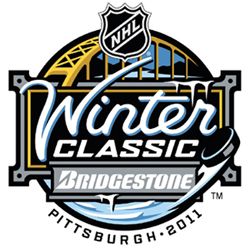 PITTSBURGH—The 2011 Bridgestone NHL Winter Classic Hockey game—an outdoor match played at Pittsburgh's Heinz Field between the Pittsburgh Penguins and the Washington Capitals— was scheduled to start at 1 p.m. EDT, on New Year's Day. But things didn't go to plan for host broadcaster NBC, CBC-TV's Hockey Night in Canada (HNIC), and other broadcasters onsite. Instead, the weather was unseasonably warm with a threat of ice-melting rain, which is why the game was postponed to 8 p.m. when the sun had set and the temperature had dropped. The last-minute schedule change played havoc with NBC's evening schedule, and forced CBC-TV's HNIC to squeeze in coverage between its regularly scheduled NHL games.

Despite the seven-hour delay, the Bridgestone NHL Winter Classic won the Jan. 1 ratings on U.S. TV, and scored as the most-watched NHL game in the United States since 1996. So the weather delay didn't hurt the broadcast, and it didn't much concern Ken Goss, NBC Sports' vice president of Sports Operations. "Since we were shooting outdoors in an NFL stadium, we were basically ready for whatever the weather threw at us—even if it was warmer than expected, not colder," Goss tells TV Technology.

An NHL hockey rink looks big when seen inside an NHL hockey arena. But when an NHL regulation rink is built outdoors on an NFL field, it looks pretty small.

From the perspective of Senior Producer/Director Sherali Najak, this made it harder to get close to the action. "Using the NFL camera positions, we couldn't get as close to the action as we are accustomed to inside a rink," he said. "So we had to go around the site and hand-pick additional camera positions for a more close-up view. Add the fact that there were two performance stages and a kids' rink on the field, and there was a lot more for us to cover."

From NBC Sports' perspective, the expanded venue required extra resources. This is why the network installed an overhead CableCam for overhead shots, and added an airplane camera for wide-angle aerial shots. RF cameras were also deployed to provide NBC camerapeople with the ability to go wherever they wanted to.

"Between the pyrotechnics, the lighting and the between-period entertainment, there was a lot going on," said Marc Hopmayer, NBC Sports' Technical Director. "This is why we committed more resources. For instance, we had 30 shared and standalone cameras; five more than we would use at a Stanley Cup."

Pittsburgh Penguin fans cheer on their team during the NHL ’s Winter Classic at Heinz Field in Pittsburgh, Jan. 1. The Caps won, 3-1. Photo credit: Reuters/Pam Panchak/LandovPROTECTION FROM THE ELEMENTS

Both NBC and CBC prepared for the expected Pittsburgh cold as best they could. "We waterproofed and blanketed the cameras, and rolled them inside when they were not in use in the run-up to the game," HNIC's Najak says. "This approach worked well for 2D, but I'm not sure how well it will serve us when we shoot the NHL Heritage Classic outdoors in Calgary in Feb. 20. We are shooting that game in 2D and 3D—and 3D motors and rigs don't like the cold much."

HNIC also had to use extra microphones around Heinz Field to get the kind of crowd noise Canadian viewers are accustomed to from indoor arenas. "In an outdoor venue, the crowd sound just disappears into the air unless you mic it," Najak says. "We need that sound to generate a sense of excitement."

Being accustomed to outdoor NFL venues, NBC Sports was comfortable shooting a hockey game at the Pittsburgh NFL stadium—and was able to tap into its NFL infrastructure to get the video/audio it wanted. So for the production crew, the big challenge was juggling the broadcast to deal with the weather delay.

"We had to shrink our pregame program to cope with the 8 p.m. start," said Assenzio. "The sudden change also meant that we weren't able to promote the new start much, beyond what we did during our scheduled 1 p.m. to 4 p.m. time slot."

Nevertheless, beyond making some last-minute changes and adjusting NBC Sports' flights out of Pittsburgh, the broadcast went well—and the ratings prove it. In fact, given this program's dominance of the New Year's Day night-time ratings, NBC might find itself praying for rain when the 2012 Winter Classic rolls around.