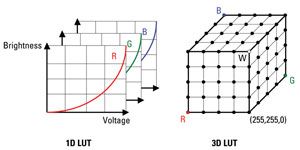 It was not too long ago when we were considering whether flat panels would overtake the venerable CRT in utility and function for professional applications. Believe it or not, that day has already passed. This month, weŌĆÖll summarize the state of the art for professional monitors and displays, and take a deeper look at some of their characteristics.

There are essentially three ŌĆ£gradesŌĆØ (also called ŌĆ£classesŌĆØ) of broadcast monitors used in a professional TV production environment. The most rigorous functional requirements are for Grade 1 monitors, which are reference devices for high-grade technical quality evaluation of picture capture, post production, transmission and storage. Grade 1 displays reproduce the highly accurate colors required by the most demanding monitoring applications, including camera control, color grading and content evaluation. EBU Tech 3320 recommends that in a Grade 1 monitor, the black level should be adjustable to be below 0.1cd/m2 (nits), the full screen (sequential) contrast ratio should be above 1000:1, and the simultaneous (within-a-picture) contrast ratio should be above 200:1. Grade 1 monitors should present pictures at a D65 reference white, and Grade 1 and Grade 2 monitors should have no visible pixel defects.

In addition to an analog baseband interface, pro monitors typically have HD-SDI digital interfaces, and more models are now including DVI and/or 3G-SDI. A typical 17in monitor can provide 1600 x 900 resolution at 1080p with 4:2:2 10-bit support. To provide the needed bandwidth for 4:4:4 color, a dual-link HD-SDI is often available. Additional professional features include focus assist, markers, waveform and vectorscope monitors, time code display, closed caption decoding and display, 1:1 pixel mapping modes, audio de-embedding and mixing, and SDI routing, as well as loudness metering and control.

A split-screen function that simultaneously displays two images side-by-side from two different video inputs can be used for multicamera setups as well as for comparing processed and original images. Built-in calibration software allows a monitor to be calibrated with a built-in sensor, without using a PC.

In addition to adjustable backlight and gamma control, advanced monitor capabilities such as video processing and color calibration technology provide support for multiple color standards, using OEM and third-party 3D LUTs (look-up tables). Monitor (and camera) users are often confused by color LUTs. Historically, cameras have incorporated gamma correction to compensate for the nonlinear signal-to-perceived-luminance characteristic of consumer CRTs. With the proliferation of LCD displays, this gamma is now reproduced in the display electronics to maintain compatibility with existing cameras. This compensation, to each of the decoded R, G and B signals, is done through a one-dimensional lookup table (1D LUT), or an equivalent real-time digital signal-processing algorithm. (See Figure 1)

Camera operators, in setting up black, white and gamma levels, are adjusting the picture colorimetry, which introduces a transfer function (input to output) of each R, G and B primary, essentially a 1D LUT. Because each primary input value is allocated to a unique output value, the mapping is accurate and requires no interpolation operation. However, the result will have errors when there is a correlation between the components, such as when colors are manipulated in a processing device. In order to remap to other color spaces, a 3D LUT (not to be confused with stereoscopic 3-D) can be used to provide better accuracy than a 1D LUT.

An 8-bit RGB system has 28 x 28 x 28 different colors, and thus making a color space transformation would require a unique mapping of each of the 16,777,216 source triplets (or nodes) to another triplet within a similarly sized space. Increase this to 10- or 12-bit color and the transformation becomes prohibitive, requiring high-speed calculations potentially involving billions of nodes. But the behavior of source and rendering devices is generally piecewise linear and continuous, so a smaller number of nodes is perfectly adequate to render a highly accurate image. Typical 3D LUTs used in 10- or 12-bit monitors for calibration and on-set look previews therefore use 17 nodes per component (for a total of 17 x 17 x 17 = 4913 nodes of a ŌĆ£color cubeŌĆØ), providing the best trade-off between hardware complexity and overall quality. Practical 3D LUTs thus have an exact correction on the nodes and linear interpolation in between.

Creating a 3D LUT is somewhat of an art, so different tables will have different levels of accuracy, and the exact same 3D LUT used in two different systems can produce a subtly different result. But one available option on current monitors is a downloadable LUT, created by third parties, which can easily be installed by the user. For example, cubes of 64 x 64 x 64, used for film finishing, are quite manageable, fitting into just a few megabytes of memory, even using 32-bit float entries.

New LCD technologies advance the state of the art

To get high performance, LCD (now including 3-D) display manufacturers use IPS (In-Plane Switching), which improves the viewing angle and color performance of the LCD panels. With this technology, the crystal molecules change the luminance at each pixel by twisting parallel to the plane of the panel instead of perpendicular to it, reducing light scattering and therefore increasing contrast, as well as viewing angle.

In a conventional TN-TFT (Twisted-Nematic Thin-Film Transistor) LCD display, when a pixel transistor is activated, the crystal compounds untwist, changing the angle of polarization of the transmitted light. The main drawback of TN technology is that the alignment of the crystals varies the farther away they are from the transistor electrode, turning at right angles to the substrates. This impairs the transmission of light, causing a drop in contrast, brightness and color saturation at wider angles to the screen.

IPS improves viewing angles of TFT monitors considerably but requires two transistors at every pixel instead of the one needed for a TN-TFT display. This means that more of the transparent area of the display is blocked from light transmission, so a brighter backlight is required. One other benefit of an IPS panel is that the pixels pass light when in the active state and block it in their passive state (when no voltage is applied), so if a pixel transistor fails, the corresponding pixel will always remain black, unlike those in a TN-TFT panel, which can get stuck ŌĆ£on.ŌĆØ

A 10-bit IPS LCD panel, coupled with an RGB-LED backlight, can provide an exceptionally wide color gamut, even expanding the ITU-R BT.709 standard by 30 percent, enabling it to display a greater range of colors than conventional LCD and CRT displays. IPS technology can also provide superior performance with high contrast (1000:1 contrast ratio or more) and brightness.

OLED (Organic Light Emitting Diode) displays offer advantages over LCDs as well: high contrast ratio, deeper blacks, faster refresh rates, wider angles of view, lower power consumption and wider color gamut. Because OLED doesnŌĆÖt require backlighting, the overall thickness of the screen can also be greatly reduced. All this comes at a price premium, and there are questions about the lifespan of OLED displays. But several manufacturers are actively developing the technology, and ŌĆö as is historically the case ŌĆö the consumer market will continue to drive the evolution of video displays.

ŌĆöAldo Cugnini is a consultant in the digital television industry and a partner in a mobile services company.