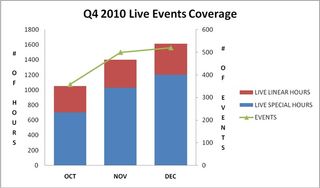 EMERYVILLE, CALIF.: MobiTV is pacing to deliver nearly 1,400 live events in the fourth quarter, the company said today. The figure represents a 14.8 percent increase in the number of events and reflects a 13 percent increase in number of hours versus 3Q. MobiTV said it would finish the year averaging 130 live sporting events per week, including the summer’s live World Cup coverage.

Sports of all types has been the driver for the company’s mobile TV service offered by Sprint, T-Mobile, Verizon and AT&T. MobiTV also rolled out an app for the iPhone and assimilated itself into several Android phones during the year. MobiTV says it now has 14 million managed subscribers.