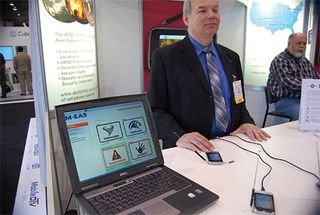 ALEXANDRIA, VA.: The 2012 International CES showcased the latest benchmarks for ATSC Mobile DTV on several fronts last month, yet what made this CES stand out from previous confabs was the inclusion of beta-stage concepts striving to go beyond Mobile DTV's basic claim-to-fame—allowing stations to merely stream local content to mobile devices.

"Our intent is to show ATSC Mobile DTV can be more than just simulcasting of a broadcaster's digital TV programs, which in itself delivers new avenues for broadcast TV," said Dr. Jong Kim, president of Zenith Research & Development Laboratory. (Zenith is a wholly owned subsidiary of LG Electronics.) "Because of the capability of receiving broadcast programs virtually anywhere, anytime and anyplace, we've shown how electronic coupons could be transmitted to mobile devices to facilitate local advertising and purchasing—including impulse-buying."

LG Electronics used CES to demo its new Mobile Emergency Alert System (M-EAS) for the first time, in tandem with project partner PBS and partial benefactor CPB. LG also demonstrated at CES how social media like Twitter might be used to provide real-time dialog, for example, between viewers and a broadcast TV host. "In conjunction with Harris Broadcast, we've shown how program video can be augmented with additional data and information and advertising to reach mass-transit viewers," Kim said.

EAS ON THE GO

In perhaps the most obvious sign yet of ATSC Mobile DTV's potential reach and flexibility, LG Electronics used CES to demo its new Mobile Emergency Alert System (M-EAS) for the first time, in tandem with project partner PBS and partial benefactor CPB. Late last year, PBS announced the pilot project in a partnership with LG, Harris, Roundbox and four PBS stations, which would serve as test markets for the technology. Those stations include WGBH, Boston, Vegas PBS (KLVX) in Las Vegas, and Alabama Public Television Stations WBIQ (Birmingham) and WAIQ (Montgomery) "Emergency messages, augmented by rich-media video and images, can be used to reach people on-the-go with critical information," said Kim. "Standard TV alerts are limited to very short scrolling messages and brief audio announcements delivered to viewers watching [typical] TV in their homes and offices. Alerts through the cellular system are limited to very short messages with little possibility of rich-media enhancements such as on-the-scene video or maps. And we've seen cellular systems get easily overloaded at times. But now other countries are utilizing Mobile DTV transmissions as an integral part of mobile alerting, and we believe M-EAS using Mobile DTV has that same capability here in the United States."

At the LVCC at CES, Vegas PBS KLVX-TV, used mobile DTV signals to transmit emergency alert content for simulated national and local emergency scenarios. LG and its Zenith subsidiary developed M-EAS receivers and funding for the pilot, while the Corporation for Public Broadcasting provided a matching grant to LG's partner, PBS.

Dr. Jong Kim One new device demoed at the TechZone was a dongle adapter for the Apple iPad that could prove crucial for broadcasters additional revenue streaming because it includes audience measurement capabilities. The receiver, powered by a Siano chip with Expway middleware, would run on an Elgato app. Expway's delivery server powering the head-end would, in effect, produce some raw forms of audience data—thus enabling stations to begin to think about how to monetize their mobile services via paid ads.

CES also played witness to device designer Belkin and the Mobile Content Venture entering into a joint venture for MCV's branded Dyle service to enable some current smartphone and tablet users to watch live broadcasts. Belkin and MCV (now boasting 77 stations in 33 markets) will collaborate on tiny receivers to enable some existing devices to capture live Dyle broadcasts. Dyle is the brand launched last year by MCV to deliver live content created by about 15 broadcast groups and networks.

"The Belkin deal is about helping existing customers get Dyle Mobile services on devices already in the marketplace," said MCV Co-General Manager Salil Dalvi. "Belkin is about co-developing a solution that will work on existing phones and tablets for the current market. One of Belkin's solutions is likely to be a match-box size dongle containing a chip set and battery pack—and an antenna design that deploys the use of a female jack that enables the [visible] wiring used for standard-issue ear buds to also serve as the antenna," Dalvi said.

MCV also unveiled a partnership with its first wireless carrier, MetroPCS Communications. Based in Dallas, the nation's fifth-largest wireless firm (with about nine million subscribers) will be the first to offer mobile TV services on devices pre-loaded with a Dyle app. Samsung will design the first Dyle-enabled Android smartphone. "This MetroPCS partnership is significant because it really addresses how and why people buy smartphones," said Dalvi.

Fellow Co-General Manager Erik Moreno said the MCV continues to talk with other manufacturers and carriers about partnering in the Dyle venture. "We demoed at CES using an iPad, and we look forward to working with Belkin to get devices approved that work [routinely] on both Apple and Android devices," Moreno said.