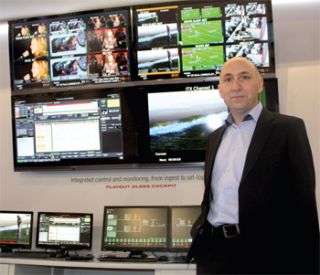 He said that broadcasters around the world have been telling Miranda the same thing: "It has become a huge burden on operators to deliver linear content that has just aired via VOD [video on demand] and other nonlinear delivery platforms."

In some cases, it takes more work to prepare content for VOD than it takes to produce the original content, he said.

With Miranda's acquisition of Omnibus, the company now supplies solutions across the entire playout workflow. Proulx said the deep integration of Miranda's iTX IT-based automation system with its new VOD Publishing solution simplifies and automates the process of preparing the original material for catch-up TV viewing.

The company also announced it has expanded its range of headend monitoring and signal processing solutions with the Axino multi-program IP transport stream loudness control processor. And it has launched a highly automated headend and edge monitoring solution for pay TV operators that offers end-to-end signal path and QoE monitoring. © 2011 NAB