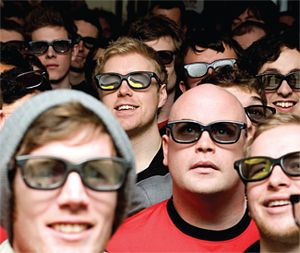 HOLLYWOOD—If mainstream 3D programming is going to become a commercially funded reality, 3D advertising is going to be inevitable. Yet at last June's Cannes Lions International Advertising Festival, 3D advertising pioneer James Stewart of Toronto's Geneva Film Co. Ltd., who produced the first 3D brand film for Toyota in 2004, was able to show attendees all 12 of the 3D ads that existed worldwide at that time.

That's one reason why, with up to 40 3D channels announced over the last 12 months (according to s3ddatabase.com), it is still to be determined how many will be supported by running 3D ads.

Tom Cosgrove, president, 3Net "There has been a remarkable amount of interest from advertisers in creating 3D ads," he said. "They all want to be the early adopters of 3D television as a media device because of the enhanced exposure they will get from the channel and also in the press."

Ad sales will be overseen by Sony, with IMAX contributing 3D programming content and Discovery handling the affiliate distribution. But do those 3D ads exist now?

"We're going to be as close to a 100 percent native 3D channel as possible once we launch," Cosgrove said. "We've explored some 2D-to-3D conversion, but our goal is to produce everything in stereoscopic 3D because of how engaging it is to the viewer."

The attraction of 3D advertising was bolstered by a comprehensive study of audience response to 3D ads released last November by ESPN Research + Analytics. The project compiled results from over 1,000 testing sessions and 2,700 lab hours at the Disney Media and Ad Lab in Austin, Texas during ESPN's coverage of the 2010 FIFA World Cup.

"The stars are starting to align for the future of 3D advertising during 3D broadcasts," said Bryan Burns, vice president of business development and strategy at ESPN. "We were pleasantly surprised by the results of this study and hope this will encourage advertisers to start producing and showing commercials in 3D."

This Lexus 3D spot was shown at the Lions International Advertising Festival. The 3D version was produced by General Film Co. Earlier this month, ESPN announced that it would take its ESPN 3D channel, launched in June 2010, full time, starting Feb. 14, airing replays of previously televised ESPN 3D events when the network is not showing a live event. Although they have over 80 live sporting events on their 3D schedule, Burns said they do not intend to mix 2D and 3D ads despite the lack of 3D advertising.

"Our intent is to provide all 3D, all the time," Burns said. "Since our 3D broadcasts have their own production trucks and on air talent we can stay at the game site in 3D and not run an ad during a break if not enough 3D commercials are available."

In the U.K., the British Sky Broadcasting Group (BSkyB) has been broadcasting 3D programming over its Sky 3D channel since April. Sky 3D is a subscription service that also carries about 3 minutes of 3D advertising each hour which accounted for 5 percent or £319 million (US$497 million) in the last fiscal year.

3D advertising pioneer James Stewart, at the Cannes Lions International Advertising Festival in 2010. "We are only running 3D ads on Sky 3D," said Jeremy Tester, Director of Brand and Strategy at Sky Media, their advertising sales house. "To ensure the best possible customer experience we are not asking them to compromise by jumping from 2D to 3D. We would rather reduce our ad inventory on Sky 3D rather than ask customers to take off their 3D glasses."

"Over time the supply of 3D ads will inevitably increase to meet our potential inventory," Tester said.

One factor that has hindered domestic 'round the clock 3D broadcasting has been the reluctance of public venues such as sports bars, hotels and convention centers to install 3D displays for their customers. Sky 3D has followed a successful campaign to help these venues finance the installation of passive 3D sets in over 1,000 pubs in the UK and Ireland that can be viewed through inexpensive viewer-friendly polarized glasses.

Fans can even find their favorite sports venue online.

When these sets start to become available in the U.S. early this year we might start to see greater interest in 3D broadcasting over here—along with a greater number of 3D ads.