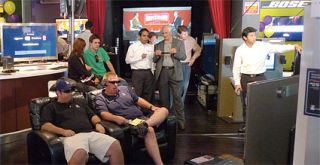 A recent survey of 3DTV owners indicated that only 40 percent of the respondents are satisfied with the amount of 3DTV programming available. The majority, though are satisfied with 3D picture quality and believe the TVs are worth the price.

In its survey, ŌĆ£WhatŌĆÖs Next for 3DTV?ŌĆØ conducted by NPD and commissioned by the Cable & Telecommunications Association for Marketing, movies rank as the consumer favorite in the 3DTV viewing experience, with 93 percent of 3DTV owners reporting they had watched 3D movies at home. This finding is in line with 2010 findings, where 77 percent of consumers perceived 3DTV viewing to be better suited to special events, such as movies or sporting events. Perhaps surprisingly, while some viewers in 2010 indicated a feeling of isolation with the 3D glasses, the majority of current 3DTV owners, indeed, reported watching 3D programming with others. In fact, 64 percent reported watching a movie with others and 63 percent said they watched a documentary with a friend or family member.

The survey indicated that 87 percent of current 3DTV set owners say they are satisfied with the quality of their 3D picture and 60 percent said their TVs are worth the price. The research also shows a shift in attitude about 3D glasses, described by many in 2010 as a ŌĆ£hassle.ŌĆØ Today, 47 percent of 3DTV set owners say theyŌĆÖre satisfied with having to wear the glasses and 55 percent are satisfied with the fit of the glasses. The survey did not reveal how respondents were receiving their 3DTV, either through subscription or via Blu-ray.

ŌĆ£Not unlike the rollout of HDTV a few years ago, consumers are still excited about the potential of immersive in-home 3DTV viewing,ŌĆØ said Char Beales, president and CEO, CTAM. ŌĆ£When HDTV rolled out, there was little hi-def programming available, but the early-adopting consumers were forgiving and willing to wait for the content to further advance. This new data show similar sentiments are mirrored in the rollout of 3DTV, indicating that some analysts maybe judging the demise of the format prematurely.ŌĆØ

Despite the abundance of 3D devices emerging in the market, consumer awareness of these devices remains focused specifically on 3DTV sets. With 36 percent of total households aware of 3D LCD TVs, awareness among other 3D devices, such as 3D camcorders (5 percent) remains low and only 14 percent of consumers are planning to purchase a 3D LCD TV in the next six months.