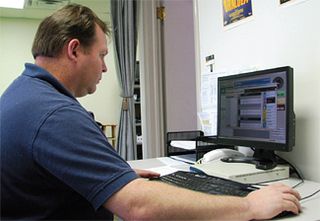 Elaine Kistler, WDEM’s general manager, and Burt Sherwood, broadcasting consultant and the station’s CEO, smile upon receiving news that the LPTV is getting a berth on Time Warner cable.
COLUMBUS, OHIO
"I've been down so long that everything looks up to me," could once have easily summed up the story of WDEM television here. But not anymore.

This low power television station has finally discovered a solution for climbing out of the doldrums after a decades-long run in dead last place in this mid-sized (DMA 34) market.

"We started out as a translator for a station in Chillicothe [Ohio] back in the 1980s," said Larry Mitchell," WDEM's chief engineer. "They wanted better signal coverage in the Columbus area. We broke loose from that in 1989 and began as an LPTV carrying the Home Shopping Network."

The little station limped along with this arrangement, barely paying its bills, until early last year when HSN announced that it was ending the carriage arrangement. It was suspected that viewership was poor, but this wasn't really driven home until the HSN programming stopped.

"We got one phone call when we quit carrying HSN," said Burt Sherwood, independent LPTV broker/consultant and now the station's CEO. "Just one single phone call, that's all."

Sherwood entered the picture when the family-owned station reached out to him for advice about dumping their ugly duckling when they learned the HSN connection was going to end.

"They came to me in August of 2008 with troubled minds," Sherwood recalled. "I told them 'don't sell it; program it!'"

Sherwood, 82, has a very long track record in radio and television successes, and decided to get personally involved with the station.

Larry Mitchell, WDEM’s chief engineer, checks out the three tiers of program playout on the station’s Rushworks automation system. "I had two meetings with the family and convinced them to hold on to the property," Sherwood said. "Much to my surprise I ended up as the CEO. From a banker's point of view, this project was going to be a 'start up' even though it was on the air. There was really no programming—just some Sunday morning children's material to comply with the Class A license requirements."

Sherwood recognized fertile ground and decided to jump into revamping the station with both feet.

"My heart was in it and I wanted to prove a point by making this the most successful LPTV in the country," he said.

Sherwood advised the Triplett family, owners of the station, to hold off before putting it on the block, and began testing the waters for a better solution. This came in the form of a digital flashcut in February 2009 and three tiers of programming to replace the HSN feed. The station now runs full time with programming from Universal Sports, Telemundo and American One Television.

Elaine Kistler, WDEM's general manager, explained that the Telemundo connection was a natural, as that network's outlet in Columbus flows through Tierra Media, which is located on the first floor of the building housing WDEM's operations. Tierra has its own studio and production facility and is able to supplement WDEM's programming on a local level.

The conversion of WDEM into a multitiered digital operation is somewhat unusual among low power stations.

"There are very few LPTVs that are multichannel digital operations," Mitchell said. "Just a handful, I believe, in maybe five or six states. A year ago, if you'd asked me, I would have said you've got to keep something analog on; I was wrong."

From a technical standpoint, the station is a marvel of efficiency and compactness. Programming transitions for all three streams are handled 24/7 by a Rushworks automation system. It uses Superior Broadcast Products encoder to encode these streams into a multitiered ATSC format, and STLs the stream to a Pineapple transmitter at a remotely located tower where WDEM leases tower space with other area broadcasters.

With the exception of some computer workstations and a remotely-located UHF transmitter, all of WDEM’s equipment is contained in these racks. "WDEM was an analog Class A with 15 kW," said Mitchell. "As a digital LPTV, we had to drop to one-tenth of that—1.5 kW. We have a CP in for a power increase to 11 kW."

While Sherwood, Kistler and Mitchell are convinced that digital delivery with its crystal clear pictures is a great way to get signals into the DMA's homes, they know too that if a television station is to survive, it has to get on cable—not something easily accomplished if you're an LPTV with a reputation as an underdog. Sherwood took on this challenge by locating a specialist in the field.

"We came to the conclusion that if we can't get on cable, nobody's going to see us," Sherwood said. "I found and hired a retransmission guy. He does all the negotiating to get us on cable systems. I know of only two people like this."

The goal at WDEM is to be carried on four different area cable systems—ultimately what could be a make-it or break-it proposition for the station, which is one of more than a dozen full and low-power operations in the Columbus market.

Sherwood's plan seems to be working—during the late April meeting with this reporter, Kistler was called away for a few moments, only to return with a very big smile.

"We just received the Time Warner retransmission agreement," she announced.