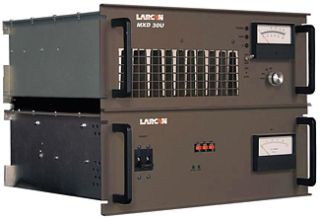 WASHINGTON—With the FCC's recent announcement of a hard deadline for low power television stations to go all digital by Sept. 1, 2015, the clock has started ticking for the LPTV industry. And with many cap-ex budgets completely blown on the DTV transition, broadcasters have had to look even closer at every dollar spent. As cable, satellite and IPTV penetration for viewership rises, many broadcasters have started to reconsider their reliance upon traditional translators, LPTV transmitters, and gap fillers to capture estranged viewers. Recent decisions by the commission, however, are forcing broadcasters to decide very soon if they want to keep, apply for, or just abandon their LPTV alternatives.

Larcan offers their “Go Digital Now” program, which leverages dollars from the NTIA grant program to help broadcasters purchase low-power transmitters like its MXD series. In 2009, a month before the analog shutoff, the U.S. Dept. of Commerce, through the National Telecommunications and Information Administration, started the Low Power TV and Translator Upgrade grant program to help broadcasters pay to transform translator/LPs from analog to digital. The program was financed at $44 million, allowing each qualifying licensed broadcaster to receive up to $20,000 in reimbursement for changing from analog to digital. As of July 1, 2011, more than $30 million is still available in the fund, and it will be available until either Sept. 30, 2012, or until the funds are depleted.

Although these funds would help with the initial investment, there are other expenses involved for broadcasters, including tower space, equipment placement, and maintenance personnel. To keep broadcasters interested in staying on the air, there needed to be more: a new business model.

"It's amazing how many full-power stations have recently gone after translator and LPTV licenses to fill in coverage areas for Mobile TV," said Jay Adrick, vice president, broadcast technology at Harris Broadcast Communications Division and chair of the Open Mobile Video Coalition, an industry coalition tasked with promoting the Mobile DTV rollout. With almost 100 stations on air with Mobile DTV, Adrick believes that mobile will drive the LPTV market for the next 2-5 years.

Byron St. Clair, president of the National Translator Association says the surge is real. According to St. Clair, their members are very busy with applications, and not just because the Mobile DTV market is growing and broadcasters need gap fillers. "The dramatic improvement in picture quality alone has added to the popularity of translators/LPTV," he said.

Even with the NTIA grant program, some broadcasters are having difficulty coming up with the dollars up front, but two major LPTV/translator providers are offering creative financing plans to help broadcasters overcome the capital crunch.

Transmitter manufacturer Larcan offers their "Go Digital Now" program, which leverages dollars from the NTIA grant program. All broadcasters have to do is qualify and Larcan will do all of the government paperwork for them. Not to be out done, K-Tech Telcom offers a financing program for their DTV Translator Package. Operators must meet the requirements of the NTIA grant program and have approved credit. Programs from both companies are for a limited time, and complete details are available at their websites.

Hovering above all of this is how the FCC's National Broadband Plan will affect how broadcasters see the future of their business.

The FCC is proposing that somewhere between 120 MHz and 500 MHz be relinquished by broadcasters from the current allocated TV spectrum. While the actual number (and process) is yet to be determined, if any spectrum is removed from the TV band, LPTV and translator spaces will become very difficult to find, according to St. Clair.

"Trying to find spectrum for an LPTV right now is like trying to submerge an inner-tube with your hands," he said. "You get one side down, the other pops up!"

To complicate matters, the FCC issued a Report and Order effective August 26, 2011 (released to the register July 15), giving LPTV or translator licensees on Channels 52 and above until Sept. 1, 2011 (four days) to apply for relocation into core channels.

In addition, St. Clair adds "the worst provision in this R & O will require all translator operations remaining on Channels 52–69 at Dec. 31 of this year to cease operations on that date, regardless of whether or not it has been possible or not to change to an in-core channel." The NTA petitioned for an urgent stay of the deadline for translators on channels 52–69, pointing out that the time schedule was completely unrealistic, but the petition was denied. This is likely to affect about 300 of the estimated 7,240 LPTVs currently on the air. Part of its justification for denying the extension, according to the FCC, was that affected licensees have had 10 years to file displacement applications.

Jay Adrick A recent NAB study, led by former FCC veteran Bruce Franca estimated that 210 full- power stations would be knocked off the air (about 12 percent, in 61 markets) to accommodate the National Broadband Plan to claim Channels 31 thru 51. If the plan even remotely approaches these numbers, the collateral damage to LPTV/translators could be far reaching.

Peter Tannenwald, an attorney with D.C.-area communications law firm Fletcher, Heald and Hildreth. Tannenwald thinks broadcasters need to think beyond the traditional model if they are going to weather the effects of the plan.

"Wireless companies have successfully created an expectation in our young people for getting all of their media, including movies, over their phones, for $9.99 per month," he said, adding that stations that transmit a single stream over their bandwidth are just reinforcing the FCC's position.

"There is a movement to get away from MPEG-2, for efficiency," he said, adding that MPEG-4, multiple streams, and even 3D could help shore-up broadcasters' claim to keep the spectrum that they currently have. Tannenwald believes that the FCC may be starting to listen, a little bit at a time.

Broadcasters have been through transitions before, including bandwidth reduction, through the recent BAS relocation plan. Broadcasters were on board because it made sense, and not a single broadcaster was displaced involuntarily. With such a large disparity between the recent NAB findings and claims by the FCC, the math for the "plan" doesn't work, and even Michigan Democratic Congressman John Dingell smells a rat, according to an August 16 letter to FCC Chairman Genachowski, where he rebukes the chairman for not providing answers to his questions about how many households could be affected, (Dingell is a powerful member of the House Committee on Energy and Commerce).

According to some LPTV/Translator manufacturers, sales have all but disappeared, likely due to the uncertainty of being able to turn it on after the purchase. However, applications are being submitted as fast as the mouse can be clicked. It's likely that many broadcasters are "hedging their bets," just in case. It appears to be like keeping your drivers license up to date, but waiting to buy the car. But who would buy a car they couldn't drive?