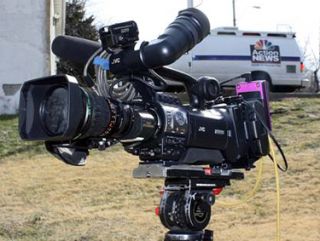 JVC GY-HM790U
JVC Professional Products Company announced the sale of 21 ProHD cameras to KSHB-TV for use in ENG.

Based in Kansas City, Mo., KSHB will use the new solid-state GY-HM790U ProHD model cameras to phase out the tape-based, GY-HD250Us previously used. The GY-HM790Us come equipped with lenses from Fujinon, and will be distributed into the field with two batteries and three SDHC cards, stated Jay Nix, chief engineer for KSHB, in a press release.

According to Nix, the JVC native file recording format is a time-saver, eliminating the need for transcoding or conversion. KSHB uses Apple’s Final Cut Pro for editing, so the cameras are set up to record native Final Cut Pro files for seamless editing. “Our media costs have dropped significantly,” Nix added.

The station plans on purchasing 11 KA-AS790G modules, primarily for use in coverage of Kansas City Chiefs football games and Kansas City Royals baseball games. Ideal for microwave transmission and long cable runs for outside broadcast trucks, the KA-AS790G attaches onto the back of a GY-HM790U camera, outputting a live signal via a standard BNC connector. The module uses the camera’s built-in encoder to transcode the MPEG-2 signal to DVB-ASI.

KSHB-TV is an NBC affiliate station owned by the E. W. Scripps Company.