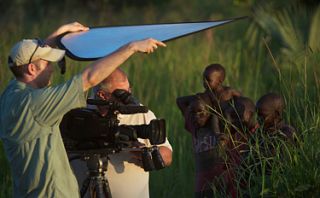 “We always strive to have our television production be something that is very high quality,” said John Pipes, senior producer at Joyce Meyer Ministries. “Which is why, after our recent transition from standard-def to high-def, we stayed with Fujinon lenses.”

A total of ten Fujinon lenses were purchased in connection with the HD upgrade. The lens inventory includes both Fujinon’s Premier Series HA lenses and HD Select Series ZA optics. They are used on a mix of Sony studio and EFP high-definition cameras.

“We purchased four wide angle ZA series lenses for our arena events and our studio, because they don’t take the beatings that the EFP cameras do,” said Pipes. “We felt optical quality was comparable and the cost savings in going with the ZA series was beneficial.”

Television production by Joyce Meyer Ministries is not limited to its Fenton, Mo. studios; teams are frequently deployed around the world to capture content for documentaries, with recent production locations including to Australia, Uganda, and New Guinea.

Joyce Meyer Ministries is able to reach a potential audience of 4.5 billion people, with coverage across more than two-thirds of the world. It broadcasts in 39 different languages and its shows are carried on more than 400 television stations.