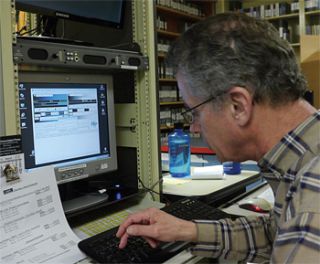 Outsourcing, a ho hum practice in Europe and elsewhere, may be master control's next techno-leap. Bill Tillson, president and COO of Encompass Digital Media, and the interview-shy big-three television network his company hosts, clearly think so.

Young Broadcasting recently installed Crispin’s Digital Transfer Agent at KELO in Sioux Falls, S.D. "We're evolving into IT-based playout from a [third party] service provider," he said. "Ultimately, all the broadcast groups—ones that own 10 to 25-plus stations and a combination of affiliations—will go to the centralcast model, the economics of operating just one facility are very overpowering and compelling economics are very important."

Will local station master control go dark? Tillson thinks so. "Our 'sweet spot' market is the facility-less station; we switch in and out of local news and that's virtually their only technical presence locally. We monitor everything all the way to the transmitter 24/7, so it's very cost-effective in terms of being able to shut-down that master control operation."

Encompass services some 500 networks from fiber- and satellite-interconnected teleports in London, Singapore and around the United States. The majority of channel launches Encompass has handled over the past 18 months run on IT-based platforms from Snell (ICE) and a handful of other trusted vendors. "Automation is becoming just another software application within an end-to-end IT solution ...the die is cast—all playout going forward will use that model," Tillson forecasts.

Joe Addalia, director of technology for Hearst Television is also an IT advocate. While eschewing automation directly on the video server, he strongly favors data virtualization. "Look at a server rack—I call them pizza boxes—you could shrink them down 10 to 1. Automation vendors need to take a hard look at virtualization, at using common, standardized IT tools and commodity hardware."

With more than 64 channels playing-out across 29 stations, Addalia is focused on connecting the dots between his group's Harris ADC automation and centralized traffic operation. BXF capabilities are key, "The single thing that makes master control run is the log. "We're very good at maintaining solid ones, but we'll never get ahead of changes; it's part of the business. We're looking at shifting the ability to make changes upstream, into the hands of traffic, or even a salesperson... we're going to create that enablement."

The backside of automation is equally important to Addalia. "Preserve the integrity of the as-run, the more we stay on automation, the more it performs day-to-day switching, breakaways and cut-ins, the more solid that as-run becomes and the less work has to be done after it leaves master control," he said. "The Holy Grail is real-time reconciliation, to know exactly what happened on-air when it happens. So if a spot gets blown-out for breaking news, it's immediately reported back to traffic and a 'next available' make-good is scheduled; that's good customer service!"

Bill Tillson, CEO , Encompass Digital Media Hearst is testing the centralcasting waters in the Midwest. "It's doing just fine, but there's a lot to consider trying to develop what works best for us," says Addalia, a centralcast pioneer and supporter of the remotely controlled automation model. But fiber costs, which he's seen increase, are an issue: "It's very expensive if you want higher reliability; we're back to prices of 15 years ago." That's a PowerPoint plus for operators like Encompass who lease fiber at wholesale and provision it themselves.

Craig Porter, vice president of engineering for Young Broadcasting, is taking a more traditional route to updating the 10 station group's master controls. Shopping for new automation, Crispin's Digital Transfer Agent (DTA) sealed the deal with robust tools to handle the daily deluge of file-based content. "It's a logical transition, not revolutionary; I'm not turning the station's world upside down... it's a progression of what we were already doing; not radically changing workflows, just making them more efficient."

Young recently wrapped-up an installation at KELO in Sioux Falls, SD, which Porter characterized as their "most challenging" yet. "They run four regional [CBS] stations and a digital [MyTV] channel, plus handling passive over-the-air and transmitter monitoring for the group," he said. The other [stations] are slated to be complete by late June. And although Young takes a laissez-faire approach that encourages station autonomy, the new systems will have enough future-proof flexibility to enable collaboration, remote access, alternate delivery platforms and other "not yet" technologies when the time comes.

Like Hearst, traffic is centrally managed; Porter looks forward to some BXF benefits once it and their new automation are fully interfaced. "A live log is the obvious thing; the other is updating traffic with the actual segment lengths of syndicated content so the log is correct—that's important, syndicators tend to change durations without telling anyone." Porter said. He echoes Addalia's desire to push greater control of the playlist to traffic and eliminate the "post-it" factor, when a log's finalized and traffic runs up to master control to stick notes all over their log... traffic should be able to make updates until 'x-minutes' before air and I'd be fine with that."

Tillson predicts that broadcast automation as we know it won't exist in five years. "[Automation] is not a standalone product anymore; it's effectively included in an IT-based playout solution," He said. Extreme perhaps, but there's no denying the number of pure "Automation-R-Us" companies is declining as they're assimilated by larger, more comprehensive purveyors of digital workflow. An interesting NAB awaits.