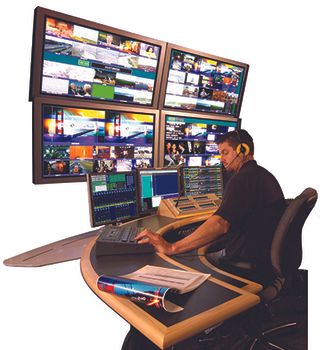 “One person is the director/switcher, while the other runs replays and audio,” said Korey Wisland, KBVO’s production manager. Granted, the output “doesn’t look like a network broadcast,” he said. “But it’s very, very close.”

Nearby, the Waco City Cable Channel, WCCC-TV, relies on a Rushworks VDESK integrated production system—and up to five Sony BRC-H700 robotic HD cameras— to cover local meetings and a range of other events. According to Larry Holze, the City of Waco’s director of municipal information, VDESK has allowed his threeperson production staff to boost their programming output. “There’s no way we could have done all this in the days of manual A/B rolling,” Holze said.

RANGE OF OPTIONS
With broadcasters and other video producers having to produce more content with less staff, integrated production systems are becoming increasingly popular. Not surprisingly, vendors such as Broadcast Pix, For-A, Grass Valley, NewTek and Rushworks have stepped in to meet this demand.

“We’re seeing a lot of interest in the Granite 1000 not just for TV, but for radio as well,” said Ken Swanton, CEO and co-founder of the Billerica, Mass.-based company. “A lot of radio stations want to serve video from their broadcast to the Web, without adding extra staff. Producing their shows using the Granite 1000 makes this possible.”

At For-A, “our Hanabi line of production switchers, including the HVS-300, HVS-350, HVS-390 and the HVS-4000, are currently integrated with clip players such as the MBP- 100SX and character generators such as the VTW-330HS,” said Pedro Silvestre, For- A America’s sales director. “We also have developed SmartDirect, a new standalone production system that offers a powerful, easy to use, template-based CG generator with audio and video playback.”

Grass Valley’s Ignite Scalable Automated Production System is designed to let one person produce live newscasts and events on their own by putting all of the control room’s functions at their fingertips. This includes video and audio switching; serving video clips, graphics and titles, and integrating with up to 32 external devices, including robotic cameras. The Ignite switcher can be set up to handle anywhere from one to four M/Es, with a maximum of 96 video and 96 audio outputs. The whole system can then be controlled using a Grass Valley QUICbox programmable controller, which can be controlled via keyboard or touchscreen.

NewTek’s latest TriCasters include the $4,995 entry-level TriCaster 40 and the $39,995 top-end TriCaster 8000. “The Tri- Caster 8000 model is the most integrated and customizable multicamera video production system on the market,” said Phillips. “It delivers virtually limitless scalability with third-party router support, recordable macros that can be triggered simultaneously, and extensive effects and graphics capabilities with eight M/E rows.”

Rushworks’ integrated production systems “are designed specifically for single person operation,” said Rush Beesley, president and founder of Rushworks in Flower Mound, Texas. “The total integration of camera control with production switching, recording and streaming is what makes these solutions unique in the marketplace.” Rushwork systems are used by government broadcasters, and are also suited for churches and performance spaces.

Rushworks currently offers three integrated production systems. The VDESK PRO (4/8/12 inputs) is a touchscreen system that combines integrated PTZ cameras with switching, graphics, encoding and streaming. The VDESK LTD (4/8) is a small chassis model supports encoding and streaming, but no output. The REMO PRO (4/8) uses the same software feature set as the VDESK PRO, but is built into a ruggedized portable chassis for remote production.

For broadcasters accustomed to multiperson crews, moving to an integrated production system may seem intimidating. But for operations where money is tight, these systems can allow broadcasters to expand their production options and look good while doing so. Better yet, running such systems is “easier than you would think,” said KBVO’s Wisland.