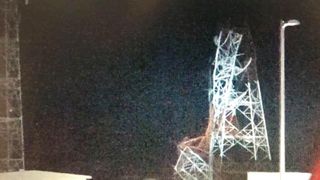 LAKE CHARLES, La.—Two broadcast towers in Lake Charles, La., have been damaged as a result of Hurricane Laura, which made landfall in the early hours of Aug. 27.

There have been multiple reports of damages to the broadcast tower of KPLC, the area’s NBC affiliate, with pictures showing portions of the tower having collapsed.

A report from WAFB in Baton Rouge provided details on the damage caused by the storm after someone was able to enter the building. As WAFB details, the KPLC transmission tower snapped in half, sending the top portion of the tower tumbling into the station's broadcast studio. The tower transmits the station's signal to its larger main tower 25 miles away; crews have not been able to check the main tower because of debris in the roads.

Despite the damage to the tower, KPLC, which is owned by Gray Television, has been able to continue delivering storm coverage to its viewers for more than 30 consecutive hours, per WAFB.

No station employees were hurt by the damage as the studio had been evacuated prior to the storm making landfall.

In addition, a representative from the Louisiana Association of Broadcasters confirmed that the LPTV station KSWL, a CBS affiliate, has reported that its tower fell on top of its building.

Chris Boone, engineering manager for iHM New Orleans and who previously worked in the Lake Charles area as the market chief engineer for Townsquare, reached out to TV Technology to provide additional details on KSWL. He said that it was the STL tower of KSWL that fell and that it is not usable, but that the station's transmitters on UHF are OK.

LAB said that it is still gathering information on any other damages.

Reports indicate that wind speeds hit a high of 150 miles per hour when it first made landfall.

This is a developing story. TV Technology will update as events warrant.

A piece of the Lake Charles skyline has collapsed, here is a view of the KPLC tower. Photo credit to Charlie Haldeman of ABC 13 in Houston. #lawx pic.twitter.com/N908vVP4QmAugust 27, 2020