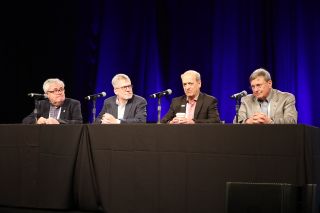 RANCHO MIRAGE, Calif.—A “Broadcasters’ Panel” has been a fixture at the HPA Tech Retreat program for years, with representatives from networks, station groups and industry organizations sharing their thoughts on contemporary TV industry developments and issues. This year was no exception, with Dave Folsom from Pearl TV; Fox TV’s Richard Friedel; Del Parks from the Sinclair Broadcast Group; and the NAB’s Skip Pizzi assembling to field questions from moderator Matthew Goldman of MediaKind in a Wednesday morning session.

Topics this time ranged from the Phoenix Model Market project to the evolution of IP and cloud for broadcasters.

Goldman kicked off the discussion by asking Folsom to describe the Phoenix Model Market and explain why it was important in the effort to rollout NextGen TV.

“It’s the result of the FCC in the late fall of 2017 coming out with a Report and Order allowing broadcasters to make use of the newly-developed ATSC 3.0 standard,” replied Folsom. “How do you make that [initiation of 3.0 service] happen? Pearl, which is made up of nine large station groups, decided to create a model market, or model station, in Phoenix to see how this transition could be done without adding spectrum. We also provide a forum for manufacturers of technical equipment for the new standard to test their equipment, as well as for receiver manufacturers to test their products.”

Goldman asked how NextGen TV would be implemented, as TV broadcast spectrum space is at a premium now with the loss of channels in connection with the current repack.

“When we went from analog to ATSC 1.0, this was mandated by the government,” said Goldman. “That’s not happening now. Without the aid of additional channels and bandwidth, how will the transition to the new service be possible without negatively impacting over-the-air service?”

“It’s going to take a little bit of legerdemain,” said Folsom. “There is a little bit of extra bandwidth in [the ATSC 1.0] signal that we have now. If we can, by market, essentially clear one channel at a time of those individual services and move them and share them on other channels, to the viewer there will not be any difference.

“This will free up a channel, and this channel can carry up to five services because new codecs are much more efficient,” Folsom continued. “This will provide the mechanism—on a rolling basis—to clear spectrum for new services without losing your ATSC 1 audience.”

With so many options for video delivery available now, why should consumers even care about a new over the air broadcast standard, Goldman asked the panel.

“For the consumer, one of the largest impacts that [NextGen TV] will have is that it finally addresses the idea of broadcast and broadband convergence,” Pizzi said. “Today, smart TV’s are already connected to the internet and a conventional television source, but you’re switching between the two. ATSC 3.0 puts those two together in a continuously variable way.”

“It’s about better pictures and sound,” Friedel added. “This is really going to impact the industry. There will also be a bunch of new business opportunities to capitalize on.”

“When you look at where entertainment—syndicated television—is going, it’s really not going anywhere,” said Parks. “Much of the shows produced are for streaming services. Linear TV is migrating to live broadcast … very local and very live sports, news and local programming. It’s just not viable for Hollywood to produce syndicated programs like they used to. It just doesn’t work.”

“OTT is anything but live and local,” said. Pizzi. “This live, local-focused service [brought about by NextGen TV] can co-exist on a more even parity in terms of quality and interactivity with those other services” said Pizzi. “NextGen TV really gives broadcasters a level playing field going forward.”

THE MOVE TO DATA

The discussion then shifted to the relationship of NextGen TV to cloud and its relevance to broadcasting.

Pizzi added that NextGen TV was about delivering data both to and from the consumer and he saw the cloud serving as a collection point for this data, which could be used for rating programs and other functions.

The panel then turned to the difficulty in finding qualified broadcast engineering personnel, as stations and production facilities alike move further and further into IP.

“They aren’t making broadcast engineers anymore,” said Friedel. “The truth is that we’re really building our own, and I think everyone else is too. We try to find bright young people and we teach them. We don’t have much of a choice.

“The good news is that it’s allowing us to change the diversity of our employment too,” he continued. “A lot more women are attracted to the IP industry [than to broadcasting]; the same is true of minorities too. This will help us create better programming and better serve our communities.”

The discussion ended with Goldman asking how broadcasters were faring in light of the move to streaming and away from conventional television.

“Business is still pretty strong,” said Friedel, citing viewership for the recent Super Bowl. “The economics are there. We’re still delivering an audience. I hate to bring up politics, but Bloomberg is spending a lot of money in targeting his advertising, and you see his poll numbers are just skyrocketing. I don’t think this business is quite dead yet.”