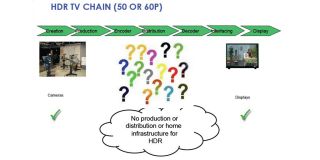 INDIAN WELLS, CALIF. – Why bother with 4KTV, or UHDTV, or Ultra-HD, or whatever name implies the developing generation of higher-resolution television? One of the key questions is whether or not anyone will notice the difference, and if it’s significant enough for people to go out and drop a dime on a new TV set after just paying off the HDTV. The European Broadcasting Union set about to find out.

“The first think the EBU tried to determine is if viewers could see the difference,” said Hans Hoffmann, EBU’s head of fundamentals and production.

The EBU assembled 72 volunteers at one of its own conferences to test UHDTV, using what Hoffmann referred to as UHD-1 material—3,840x2,160 pixel resolution images collected at 50 frames per second collected from Sony F65 test shoots. It was cropped from 4K to 3,840 pixels horizontally. Copies were down-converted to make the HD-UHDTV/4KTV comparison. HD resolutions used included 1080p/50, 720p/50 and a conversion of the 1080p/50 to 1080i/25 using an HHI filter and subsequent de-interlacing.

Test footage was run on a 56-inch “UHD-1” monitor that was not, “Grade 1,” Hoffmann said. Six sequences were shown of the four resolutions, including UHD-1. Two viewing distances were used—1.5 times picture height, the standard distance for viewing UHD-1, and 2.7 meters, the average domestic viewing distance in the United Kingdom.

Samples were shown in 12-second sequences. Participants were asked to rate them bad, poor, fair, good or excellent.

Between 720p, 1080i and 1080p, there was no conclusion of perceptual difference. There was a “statistically relevant, but very small,” perceived improvement of native 4K content when it was presented on a UHDTV screen,” Hoffmann said.

“The results are only applicable for uncompressed sources,” he said. “Transmission compression may change results significantly…. In order to create an immersive impact, resolution alone will not make the difference… to make consumers go into shops and buy theses screens.”

More frames are also necessary for motion portrayal, and so the full distribution eco-system must be able to handle higher frame rates. There are cameras and displays for 60 fps, but nothing in the middle, he said. The same goes for higher dynamic ranges.

“UHDTV is a mid-longer term development,” he said.