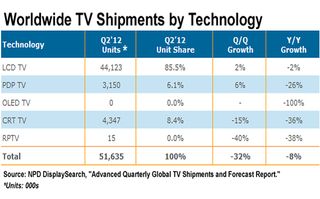 For the second consecutive quarter, shipments of TVs worldwide fell, according to a new report from NPD DisplaySearch.

The report, “Advanced Quarterly Global TV Shipment and Forecast Report,” indicates the decline, which began in the last quarter of 2011, reflects the worsening economic conditions across the globe and slower erosion of prices, both of which affect consumer demand.

In Japan, where the biggest drop was recorded, shipments for the second quarter of the year plunged 77 percent year-over-year (Y/Y) to less than 1.4 million. Overall, shipments in developed markets were down 23 percent Y/Y, while emerging market growth slowed to 3 percent from double-digit growth at the end of 2011.

China reversed the decline it experience in the first quarter to post a 6 percent gain in the second quarter. Eastern Europe witnessed continued double-digit growth in demand, but all the other emerging markets saw shipment levels fall from a year earlier.

“A sharp decline of demand in Japan and a correction in Europe following the analog broadcast shut-offs in 2010 and 2011 have significantly impacted the TV market and contributed to a decline in shipments,” said Paul Gagnon, director, North American TV Research for NPD DisplaySearch.

LCD TV shipments were down Y/Y for the second quarter in a row, falling 2 percent, but demand for LCD TVs that are 40in and larger is strong, with second-quarter shipments rising more than 15 percent Y/Y. Advanced features within the LCD TV market also showed improvement, as LED, high frame rate and 3-D all increased in share during the second quarter. Meanwhile, plasma TV shipments fell for the sixth straight quarter, down by more than 20 percent.