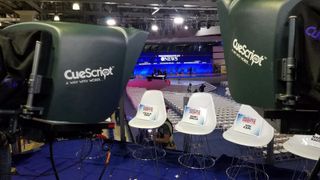 CueScript monitors were used by moderators and anchors for ABC's broadcast of the Democratic presidential debate in New Hampshire. (Image credit: CueScript)

SEATTLE—The COVID-19 pandemic has forced TV stations to re-assess and re-invent many elements of the production chain as well as the tools they use to deliver the news and forcing news anchors to set a good example by socially distancing and working from home. Teleprompters were among those important elements that did not go untouched.

Demand for more systems increased as soon as the pandemic broke in mid-March, according to Chris O’Brien, president of Telescript International. “We got calls from some of the networks that were familiar with our equipment and they said ‘we need to get stuff so we can anchor from all over. Can you get us as many systems as possible?’“

After the initial scramble, O’Brien and his staff immediately noticed problems with remote anchoring. “We saw the quality wasn’t that good,” he said. “So we asked ourselves, ‘how do we get this good for prompting? How do we get it good for production?”

But it wasn’t just the news stations that had issues. For corporate clients using prompters to communicate to their associates, the scripts may contain proprietary secrets, so a certain amount of security was needed, he added.

Using existing web technologies along with Telescript’s hardware and software, “we created this whole system we call ‘Contact Free Recording with Prompting,’” dubbed “CFR,” he said. Not only does CFR provide high quality prompting, it enables a high quality video and audio recording of the camera output so that later repackaging of the content can edit from the best quality source material.

The CFR kit is designed for non-technical users, O’Brien added. “All the talent has to do is connect to the internet. Once that happens, the prompter operator—or it could be a video technician, whoever it might be—can actually take full control and get that back to the station.”

According to John Veenstra, president and chief engineer for Tekskil Industries, prompting solves only one part of the information puzzle inherent in remote anchoring. “The loneliest people on TV are the guys in front of the camera,” he said. “Everybody on a show knows what’s going on except them. So any help you can give them is huge.”

In 2019, the Vancouver, B.C.-based company introduced the network-based “Floor Manager” that includes a prompter for a PTZ camera, talent monitor, three different digital clocks, three levels of tally, and camera ID. Finally there’s “ad hoc messaging,” where text messages can be sent to the anchor.

The kit was developed to “support the talent on the other end,” Veenstra said. “We’ve integrated the platform with the PTZ cameras as well. We’ve got a product called ‘the hub’ that sits on a server or a laptop, or a desktop, whatever you want. And the application can control all of that stuff, including the Floor Manager.”

“We had engineers who needed to get prompters in the field that day,” he said. “Often they would look to have a solution later that week, but we were able to deliver it that same day. That was a shock to many an engineer.”

Several years ago Autoscript updated its WinPlus-IP software to include an iPad interface license.

“That allows us to prompt directly to an iPad,” he said. “We’re not going to be streaming video, we’re just sending text to the iPad, and the iPad generates its own video,” he said. “The specific advantage there is that we don’t have to wait for all the bits to arrive and be assembled into an image.”

Three versions of iPad mounting configurations are provided by Autocue and include the camera plate and the iPad mounting hardware itself, Brady said.

QUALITY, EVEN FROM A BASEMENT

Cuescript President Michael Accardi said he never thought he’d be selling teleprompters for use in anchors’ basements, but that’s been a big part of their business right now.

“With social separation, you still need a prompter,” he said. “The funny part is you’d think they’re going to put a cheap prompter in the house. Well, just because you’re in somebody’s house it doesn’t mean the anchor’s eyes are going to get any better. In some cases you can go smaller because the distances are shorter, but you still need a decent quality unit that has the brightness, the contrast and scrolling smoothness to it.”

“A lot of people didn’t know that they already had that capability with our equipment. CueTALK, which provides IP capability, was something we had already added to the standard product line,” Accardi said. “So that was really a winner for us.”

He added that, with the company’s CueMe tablet application, users can take an iPad and preview their scripts. “You can be anywhere you want and you’re getting the rundown from the studio, they’re constantly updating, letting the talent keep fresh and ready for what’s about to happen.”

JT Meidl, owner of Mirror Image Teleprompters, said his company saw a little uptick in small prompter sales for anchoring from home. “But to be honest, the bulk of people went cheap and didn’t put a mirror in front of it, just a camera clipped on top of a monitor. It hasn’t been a super big influence.” Overall prompter sales started off well in 2020, he said, until school budgets got slashed.

One of Mirror Image’s most popular sellers is the PT-160 OS, a camera prompter specifically designed for the new all-in-one robotic pan-tilt-zoom cameras manufactured by Sony, Panasonic and others. HD wide-angle glass beam splitter mirror allows for maximum camera movement. “People who try them really like them.” Meidl said.

Home, however, is not always where the news reports originate. One variant from anchoring from the house is a show anchored from a van parked on the street each morning. The talent hops out of his Washington, D.C. home and into the van complete with background, lighting, camera and audio, cellular modem for connectivity and of course a prompter.

If and when COVID-19 eventually gets tamed, there’s little thought that anchoring from home will disappear along with it. People are getting too used to it.